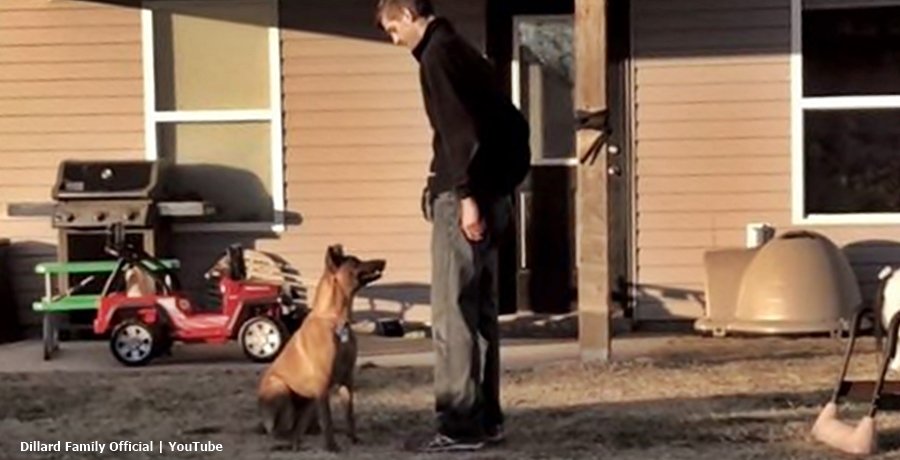 Derick & Jill Dillard adopted a rescue and named her Fenna. Not a young dog, the Belgian Shepherd came along with some obedience problems. Initially, they allowed the dog to sleep indoors and they spent a lot of time helping her settle in and sleep. However, the pup soon ended up sleeping outdoors in an igloo. The Counting On alums picked up a lot of criticism for that. Now, they train the pup, Jill says they allow her indoors as she learns to follow commands. Derick and his wife spend time training her not to jump up or eat from the table.

We reported that Katie Joy from Without a Crystal Ball ripped into Jill after she and Derick made the dog sleep outside. She ranted about how the Counting On alums should rather train the dog. Additionally, some followers wondered if they told the shelter that Fenna would be an outdoor dog. Whether Jill saw the post about it or not, she and Derick now make an effort with training Fenna.

Derick & Jill Dillard also worried that the dog might bite the kids. Entertainment Chronicle noted that the kids needed some training as well. The outlet noted that Jill taught them not to take Fenna’s bone away. She said, “they need to be careful about touching her when she has food.” Teaching them how to pet the dog without hurting it also became an important objective.

Training Fenna to sit, get down, and not jump up on the kids

On April 17, Derick & Jill Dillard shared another video about Fenna on YouTube. This time, she explained that they ate their breakfast and Fenna was with them. They try and teach her not to try and eat their food, or jump up on the table. So, they spend time training her in basic obedience. In the video clip, the dog looked happy and healthy and enjoyed the training “game.” Derick got her to fetch and return a ball. Plus, using snacks as rewards, she sat down on command. Another problem seems to relate to Fenna jumping up on the boys. However when Jill told her, “down,” Fenna obeyed.

Derick & Jill Dillard also practiced calling Jenna from out of sight. Success came as the dog ran right around the house in response to Jill calling her. Certainly, it looks like the family makes every effort to provide a home for Fenna that is safe for both the rescue dog and their kids. In the comments, one Counting On fan said, “SO, SO GLAD to hear a FENNA UPDATE!!! Sounds and looks like u all are coming together!! So happy for all of u!!”

Other fans of Derick & Jill Dillard agreed that making training a family affair seems like a very good idea. Do you agree? Sound off in the comments below.