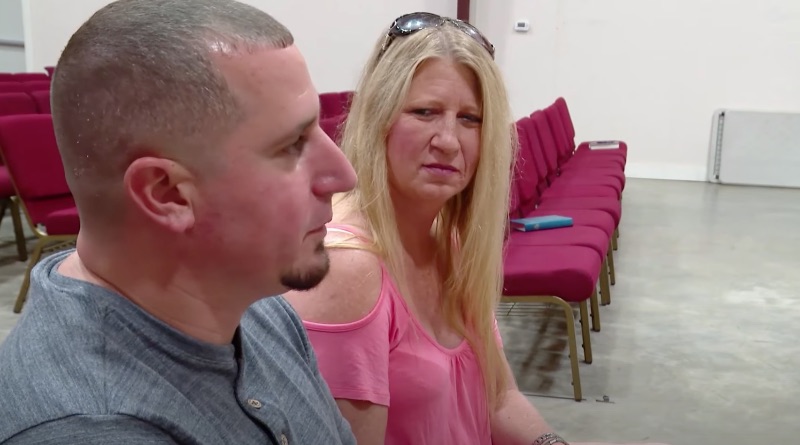 Love After Lockup cast member Angela Gail seems to be getting rid of Tony’s things again. What did the former felon do this time around?

Angela Gail and Tony are one of the more explosive pairs from the WEtv franchise. It seemed like the pair called it quits for good. But as watchers know, they always seem to find a way to come back to each other. They confirmed on a web-only episode of Life Goes On that they are back together. Meanwhile, some watchers think it may only be a matter of time before things hit the fan again.

In one of the more memorable scenes from this pair, Angela threw all of Tony’s belongings in her front yard. Adding even more drama to the situation, she set his items on fire. Meanwhile, it looks like she is getting rid of his things once again. Is there more trouble in paradise for these two?

Is Tony in the Dog House with Angela?

Angela took to social media to share that she is selling the 2000 Harley Davidson Sportster that Love After Lockup watchers saw Tony driving on the show. She is selling it for $2,500. Meanwhile, that’s not the only reason that draws attention to her latest social media share.

Usually, whenever Angela Gail gets rid of Tony’s things, it means they are in a bad place. So many Love After Lockup watchers assume Tony went back to his old ways and did something to upset her. As watchers know, Tony has a reputation as a charmer and a ladies’ man. But luckily for the pair, his womanizing ways don’t seem to be the culprit this time around.

According to Angela Gail, the reason she wants to sell Tony’s ride is that he hardly uses it. In her words, motorcycles are “meant to be rode.” And it doesn’t look like Tony does that.

Usually, Angela Gail getting rid of Tony’s Love After Lockup items tends to be a bad thing. But at least this time around, that doesn’t seem to be the case. Angela said in the past that someone has to keep an eye on Tony. This is especially true when it comes to him sliding back into his old habits. And at least for now, she seems more than willing to step back into that role for him.

In addition, even when things look dire for the Love After Lockup couple, they always seem to find their way back to one another. Meanwhile, at least for now, they seem to be in a good place as far as their relationship is concerned.