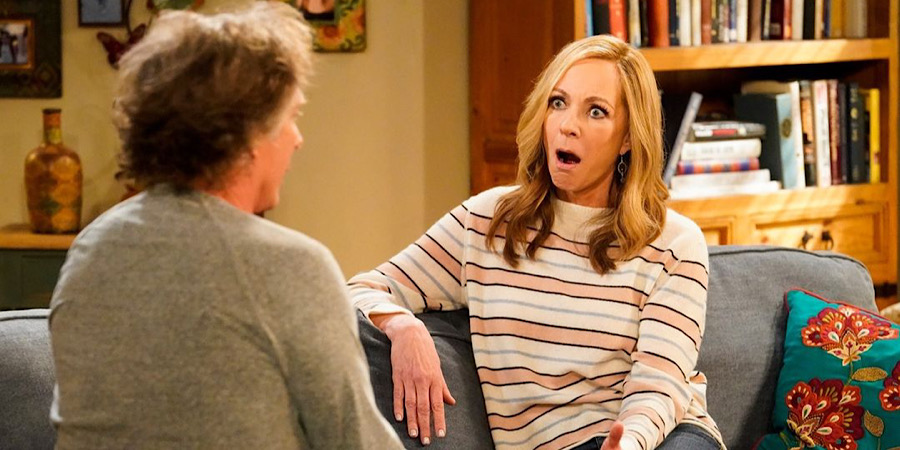 Last week on Mom, an old billboard of Christy from her stripping days was discovered on the highway. Desperate to get it taken down, Bonnie went to the club Christy worked at. Unfortunately, the manager said it was too much of a moneymaker to have it removed. So, she and the ladies went and painted over it before her daughter could find out it still existed. Jill and Rod finally spoke about their night of passion. They agreed to be friends yet cannot keep their hands off one another.

While doing laundry, Bonnie finds a notebook of Adam’s with a girl’s names and star ratings in it. Of course, she assumes he has been rating the women he’s slept with. It is his amends list from AlAnon which he lost a year ago. The stars represent how severe his behavior was but he has yet to actually take the steps to make the amends. She asks where her name is but proceeds to find it. Turns out to be another Bonnie.

Bonnie notes her list was a bunch of laws she broke. Adam’s sponsor made him look at his treatment towards women and see the error of his ways. He made the list and then proceeded to lose it. Bonnie tells him it is time to get cracking on the list but he is not necessarily ready. She says she is a pro at this so she is ready to assist him. The first person Bonnie finds is five-star Ashley whom he dated right out of college. He slept with someone she knew and then moved to LA and ghosted her.

The ladies are waiting for Bonnie at The Bistro and she jumps in with the morning she had. When Adam went to call Ashley, he discovered she had passed away. This triggers Tammy to realize she needs to get to her biggest amends- the steakhouse she robbed that landed her in prison.

Bonnie and Adam are watching television but he is so distracted by Ashley’s passing he does not even want a beer. She can tell he is still sad over Ashley but feels the mourning period should have passed by now. He decides he needs to be alone. Adam is finally being vulnerable and does not understand why women want the sensitivity until they get it. She has so many scenarios about why Ashley is so important to him. Does he have a secret life with her? A secret family?

Tammy heads to the steakhouse and tells the manager she robbed the place nine years ago. She is there to make amends until Bonnie calls her. Adam took off in his RV and she cannot find him so she is panicked. He ends up in a restaurant with guys debating what constitutes a sandwich and yells at them. They mock him for his wheelchair and he gives them an evil look. Meanwhile, Tammy apologizes to the steakhouse manager for the disruption.

Tammy has to try to clarify the difference between an apology and amends to the manager. He just wants to be run over by a car. Interestingly enough, it is not Tammy who gets aggressive but rather Adam. Marjorie is at the jail, bailing him out. The officer knows her there as she bails a lot of people out. He punched a guy out at the restaurant and got arrested but did not want to see Bonnie. Thus, he called Marjorie for help.

Adam Opens Up To Marjorie On Mom

Bonnie still cannot find Adam when she arrives at The Bistro and both Marjorie and Adam are not answering their phones. Marjorie is with Adam in his RV after the arrest and bailout. He says he called her because Bonnie always says how helpful Marjorie is. She says he has to start being honest and he admits he slept with Ashely’s mother several times. Bonnie knows none of this and he has felt horrible about this.

Adam can never make amends with this so how can he fix it? She tells him he needs to live differently and to be honest with Bonnie no matter how much it hurts. He asks how he can repay her and she says she wants to borrow the RV for the next music festival. Adam is finally honest with Bonnie and she says she will need jewelry after all of the honesty.

Sadly, Ashley and her mom never spoke again because of him and he holds that guilt. He never wanted Bonnie to look at him any differently than she does. She apologizes for shaming him and is happy he is capable of remorse. They go to the area where Ashley is buried and she is next to her mother. Bonnie places flowers in the vase and leaves Adam to have his moment of peace. Then the ladies dine at the steakhouse. Just five episodes left until the series finale. Catch Mom Thursday nights at 9 pm on CBS.