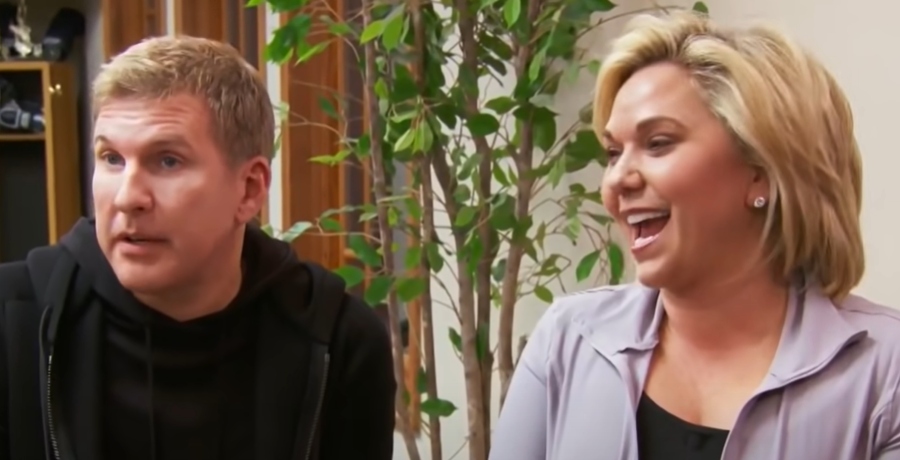 While the latest season of Chrisley Knows Best may be over, that doesn’t mean fans don’t get to hear from the Chrisleys. Weekly, Todd and Julie get together for their podcast, Chrisley Confessions. During this podcast, they give listeners an update about what is going on in their lives. Later in the episode, they respond to fan messages left on the podcast voicemail. In the most recent episode, a fan wants to know about reality shows. She specifically wants to know about filming in public. The fan wonders if the cameras are in their face. Additionally, she wants to know if the paparazzi follow them around. Keep reading to find out how Todd and Julie answer these questions.

Todd Chrisley begins by addressing the question about filming in public. “Yes, the cameras are right there.”  However, it doesn’t stop there. Todd explains that everyone else in the restaurant (for example) has to sign releases. “Everyone knows that we’re filming if we’re out at a restaurant. Or if we’re out period.”

Next, Todd addresses dealing with paparazzi. The answer is yes, however, there are some variances of to what degree the Chrisley family has to deal with paparazzi. Todd explains that they typically follow them around when they are in Los Angeles or New York. Luckily, it doesn’t seem to be an issue in Nashville, Tennessee. “That’s why we’ve chosen Nashville, Tennessee to be our home base,” share Todd.

How the Chrisley’s deal with private matters while filming

Also, Todd Chrisley gives some insight into how he and Julie address private issues. He explains that if they need to take care of something, they unplug their mics and go address the issue. This is also relevant when they have to deal with something with any of the kids. Also, if one of the kids is going through something, they go to Todd and Julie’s bedroom to unplug everything and talk. Ultimately, if one of the kids doesn’t feel like filming that day, Todd assures listeners that they don’t film that day.

Do you wonder what it’s like to film reality television? Share some of your thoughts in the comment section below. Come back to TV Shows Ace for more Chrisley Knows Best news. Make sure to tune into Chrisley Confessions late Wednesday/Thursday for the scoop on the Chrisleys from the Chrisleys.