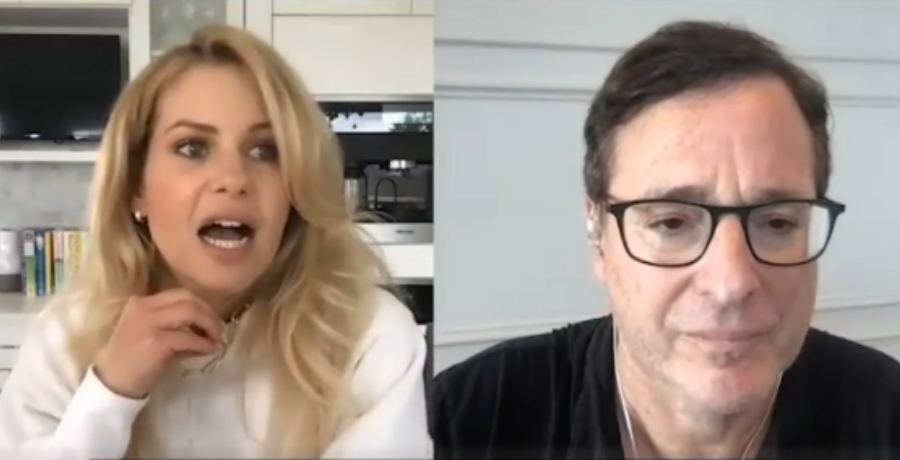 Fuller House star Bob Saget defended Candace Cameron Bure. He revealed that she’s not “fake,” in fact she’s “the opposite.” The actress wanted her co-star to respond to the criticism she’s received about coming across as a “fake person.” Saget claims that she’s “such a happy person,” which can come across the wrong way.

The 45-year-old has received a lot of backlash in just the past few months alone. Her Instagram followers mocked her children when she posted a family photo over the holidays. Then, Candace got flak for who she follows on the social media platform and even her acting skills.

The comedian is defending his TV daughter. On Monday, April 12, Bob Saget invited Candace Cameron Bure to his “Bob Saget’s Here For You” podcast. He proved that he was there for her. During their conversation, the 64-year-old addressed the claims that she has a fake personality.

“I’m going to ask you to talk about me for a second,” Cameron Bure said on the podcast. “For those people that think that because I am a happy, positive person, that I must be a fake person, would you say that that’s true or false?”

“You’re the opposite of fake,” Saget responded. “And I’m sorry — you’re perky sometimes. What’s wrong with being perky?”

The two first worked together on the set of Full House in 1987. They later reunited for the Netflix revival, Fuller House. On the show, Saget plays her father, Danny Tanner. Cameron Bure is best known for her role as D.J. Tanner when she’s not busy playing the “Queen of Christmas” or Aurora Teagarden on the Hallmark Channel.

Cameron Bure and Saget have become good friends over their years. Their playfulness and camaraderie showed during their conversation. Cameron Bure admitted that she wasn’t fishing for compliments. The online trolls accuse her of coming across as fake.

Candace Cameron Bure let online comments get to her

Normally, Candace Cameron Bure is a tough cookie. She’ll fight back at trolls whatever chance she can get. She has no problem defending her family on social media. However, Cameron Bure admitted that the comments about her personality got to her a little.

“But when people are annoyed at me that I’m such a happy person …” the actress continued. “I was, like, let someone speak into this that’s known me since I was 9 years old.”

What are your thoughts on the comments that Candace Cameron Bure is “fake”? Do you think it’s uncalled for? Sound off below in the comments.