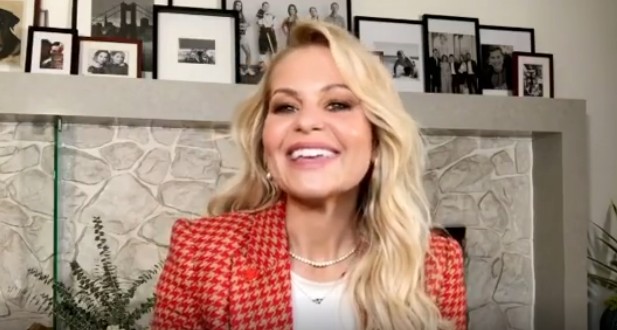 Candace Cameron Bure is responding to the skeptics. People have their doubts about those who star in Hallmark Channel films. They assume that the actors that star in these made-for-TV movies don’t require real acting skills. But the Aurora Teagarden star revealed that it’s not “easy” to make these ridiculously sweet and romantic movies.

According to Candace, it requires acting experience. She shut down a major misconception that most people have about Hallmark Channel movies. The former child star made an appearance on The Paula Faris Podcast with host and journalist Paula Faris. There, she dished on what it really takes to make these magical movies.

On Tuesday, February 2, Candace Cameron Bure discussed her longtime career with the Hallmark Channel. She has starred in 26 movies over the years. Host Paula Faris talked about her interest in starring in a Hallmark movie one day despite having no acting experience. She also wanted to know “how hard” it is to act on such a film, per Us Weekly.

While Paula claims she was joking, Candace used that moment to slam the critics. She admits that it’s a common question she gets. The Fuller House star talked about the experience she had working on the movies.

Over on her Instagram Stories, Candace further clarified her comments. The Hallmark actress told her followers not to “believe the headlines” and listen to the podcast episode instead. Candace wasn’t “clapping back” or saying that everyone should star on Hallmark Channel movies. She was just having a “fun conversation” about them.

The 44-year-old actress is best known for her role as D.J. Tanner on Full House. But she reinvigorated her career by appearing on the Hallmark Channel. To date, Candace has starred in nine Christmas movies. Her latest film was Christmas Under Wraps, which premiered in November 2020.

In a previous interview with Southern Living, Candace Cameron Bure says she’s a big fan of the network. She doesn’t get tired of the movies. In fact, it’s one of the channels she watches the most.

“My TV is on Hallmark nonstop and not just because I’m on it,” Candace explained. “I genuinely love the Christmas movies that they have on. They are great to sit down and watch or to have on in the background while you’re doing other stuff.”

Over the years, Candace developed “a great partnership” with them. She loves their values and what they stand for. The Full House alum says she’s “very picky” about who she chooses to work with, especially those who are “representative of families and good values.” So, it made sense for Candace to join forces with the Hallmark Channel since their “branding lines up perfectly.”

And she has no intentions of leaving anytime soon. As for her three children – Natasha, 22, Lev, 20, and Maskim, 19, they don’t watch any of her Hallmark Channel movies. On The Kelly Clarkson Show, she joked that they groan and want to watch something else other than “another Hallmark movie.” But Candace really loves these movies and what she does.