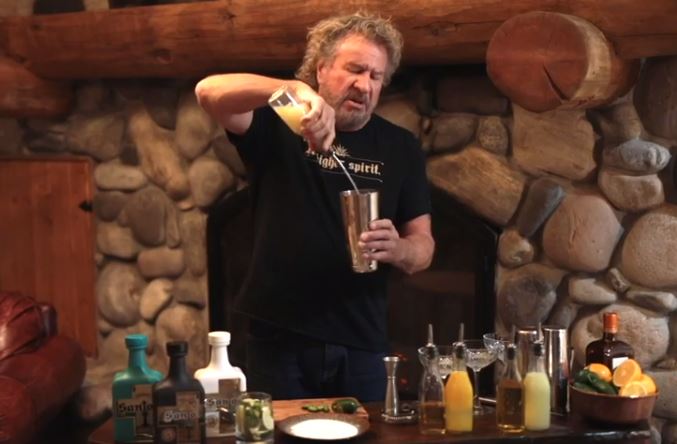 Sammy Hagar can’t drive 55, and he can’t make a bad margarita either.

In TV Shows Ace preview clip below, he gives a step-by-step tutorial on how to craft the famous drink invented by a bartender who crafted a drink for an allergic woman.

Carlos “Danny” Herrera developed the drink at his Tijuana-area restaurant, Rancho La Gloria, around 1938. As the legend goes, Herrera dreamed up the cocktail for one of his customers, an aspiring actress named Marjorie King who was allergic to all hard alcohol other than tequila.

What happens on Sammy Hagar’s Sleepover?

The original cast of MTV’s The Real World: New York stop by the sleepover to party, and comedian Dariany Santana and fitness trainer to the stars Isaac Boots dance the night away to iconic sleepover party movies.

1st Look Presents: Celebrity Sleepover is part interview show and part variety special and a place where your favorite celebrities mix it up with host Johnny Bananas.

Caveat as the games are for adults only, and you can eat and be merry to your heart’s content.

Shot from his own living room, Johnny is the ultimate host and invited his guests and viewers get to take part in every sleepover challenge imaginable. Bananas is reality TV royalty. Prior to being on The Challenge, Johnny was cast on MTV’s The Real World.  He first made his debut on The Duel in 2006.

Whether he’s competing in a food dare, sharing a scary story, or hitting the kitchen to create the best in midnight snacks, or crafting the most sippable cocktail, Johnny has created a new Midnight Special, although he is a bit less hairy than the iconic Wolfman Jack.

What happens in the clip?

Prepare yourself to be schooled as Sammy makes the perfect margarita.

He says: “You fill that halfway with ice and here’s the reason why I don’t use ice in my drinks…because once it waters a drink down, it starts tasting and [has] lost its flavor and you end up leaving it on the table. So you put ice in a shaker and take lime juice so you use like an ounce, let’s say if you want to make it.

Bananas is following along and adds: “I’m doing this mixology style bro! I’m squeezing my own limes over here!”

Hagar shows us his method which calls for simple syrup and “however much lime you put in there” as he makes sure the same amount of sweetener is added so the drink proportions are correct.

Bananas confirms that they are using the Blanco tequila for this recipe, which Hagar confirms. He salts the rim and finishes the simple drink.

He says: “How often do you get to make a margarita with the margarita king himself?  Not very often.

Holding the chilled cocktail, Hagar says: “How does that look? Pour it straight up, no ice [and] that my friends is a perfect margarita…
can I get a witness?”

Bananas says: “I gotta say, this margarita would blow the tennis balls off my grandmother’s walker.”

April 24th: Johnny Bananas sits down with the host of The Margaret Cho podcast Margaret Cho who breaks down doing stand-up during a pandemic.

Also Margaret and Johnny are joined by a psychic for a slumber party tarot card reading, and Johnny gets into the heads of MTV’s The Challenge All-Stars.