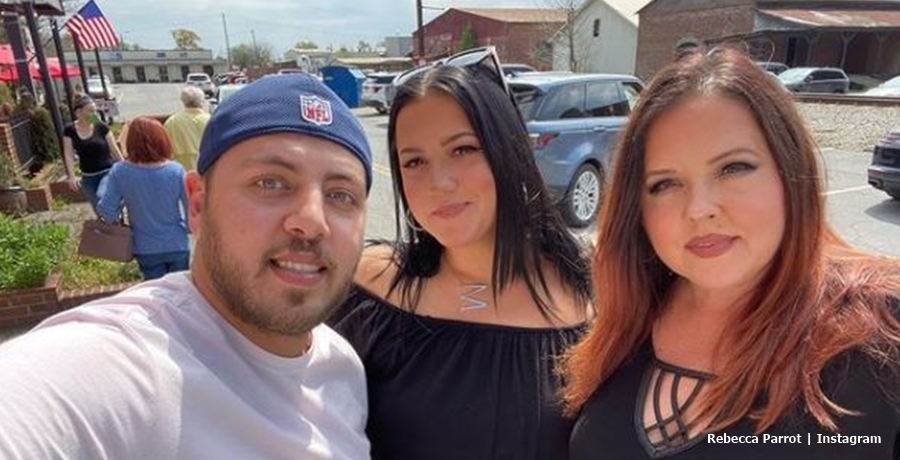 Rebecca Parrot’s makeover started after she and Zied Hakimi reunited in the USA. Unashamed to admit it, she enlisted the help of a plastic surgeon. Later, her daughter helped her out with changing her hair color. As fans know the 90 Day Fiance star hovers close to 50 years old, they can’t help but notice she looks much younger. However, she just revealed a photo that fans agree takes her makeover to next-level amazing.

90 Day Fiance fans wonder if Rebecca goes all out with her makeover to try and keep Zied, her Tunisian husband by her side. After all, he’s way younger than her. In January, we reported that Rebecca darkened her hair and said she underwent more face injections. Additionally, the TLC star told her fans in February, that she went for more Dysport injections which help fill out facial lines. She also changed her hair color and her daughter dyed it black. So, she matchy-matched with Zied in that respect.

Rebecca Parrot’s makeover included fat removal from her abdomen as she carried a bit of a tummy pouch. Screenrant noted that she also planned for a similar procedure for her “legs and thighs.” Unfortunately, Rebecca still uses a lot of filters on her Instagram. However, she looks much younger and she slimmed down a lot. So, impressed 90 Day Fiance fans flood her posts with compliments. Recently, Rebecca met with Tiffany Franco Smith who returned from South Africa.

Tiffany Franco ‘Stuck in South Africa’ & It’s Not Clear Why

On April 9, Rebecca explained that Tiffany helped her notch things up again with her style.

Rebecca Parrot’s makeover photo made fans think she shared a photo of herself from years ago. Meanwhile, other TLC fans thought she shared a photo of her daughter. In her caption, the 90 Day Fiance star sounded blown away. She said, “Omg I am obsessed with my hair!” Next, she explained that Tiffany Franco, her fellow castmate “colored it and put in…extensions!!” Clearly, the new style goes a long way towards revealing a next-level transformation.

Impressed fans couldn’t help but comment on the latest step in Rebecca Parrot’s makeover. A few fans called her out for using filters, as usual, but others don’t mind so much. Even if she used a filter, she still looks amazing they agree. One fan commented, “Whaaaaat?!? You look like you’re in your early 30’s!! 🔥🔥🔥.” And another one noted, “Woah amazing! Don’t go back to red. This looks so good. So much young looking.”

More compliments rolled in and a TLC fan told Rebecca, “I thought this was an old picture of you from your early years!!! Color is great…”

Sound off your thoughts in the comments below about Rebecca Parrot’s makeover and the new hairstyle. Do you agree it seems next-level amazing?