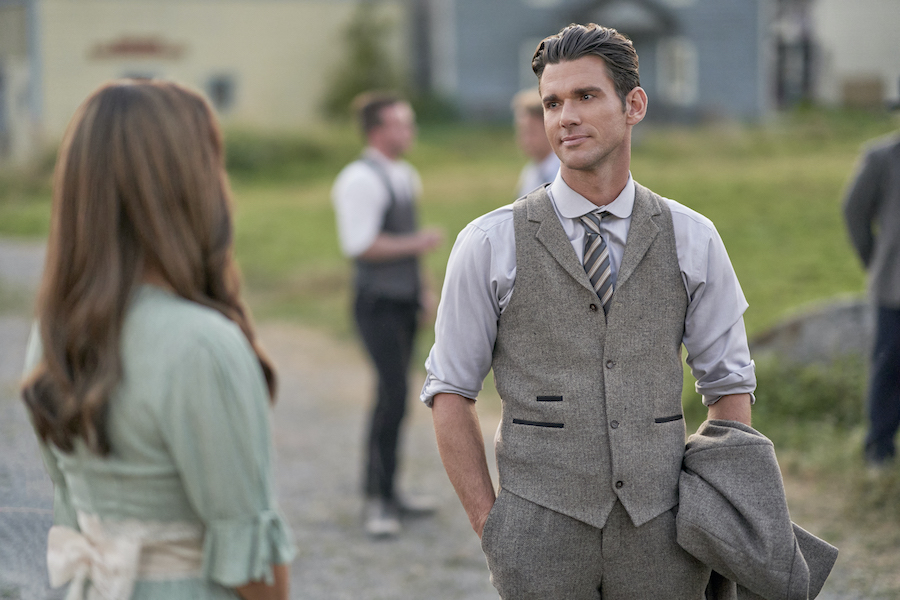 If When Calls The Heart fans thought that Nathan would go down easy, think again. Although Elizabeth has dismantled the love triangle, by choosing Lucas, the Mountie is not going anywhere, anytime soon. At least that is what a new sneak peek seems to indicate!

What do we know about the upcoming episode called “A Parade and A Charade?”

When Calls The Heart Triangle Confrontation!

When Calls The Heart Season 8 is proving to be a roller coaster ride with all sorts of twists and turns. According to an exclusive ET clip, there is major tension between Elizabeth and Nathan. That is because Allie invited only her teacher to her adoption ceremony.

Elizabeth is feeling quite guilty, as she can see that Nathan’s niece is quite dejected that Elizabeth chose Lucas over her uncle. Moreover, Elizabeth and Nathan have a very uncomfortable discussion about Allie’s special ceremony. Nathan is cold and distant as he points out that he was “just as uncomfortable” as she was at the ceremony.

When Elizabeth continues to press upon the guest list, Nathan cruelly points out that he saw Allie’s guest list. However, Elizabeth’s name was not on it. Moreover, Elizabeth is upset that he would be so “hurtful” to her. But, Nathan disagrees. “Elizabeth, if that’s what you think of me.” Then he sighs. “You don’t know me.”

Now, Nathan has to dash off. A prisoner has escaped and the mountie has no time to dissect his matchmaking nieces’ guest list. Subsequently, just as Nathan tries to run off, it is now Lucas who interrupts his mission. Nathan has no time for this and cruelly says, “Save it.”

What Does Title ‘A Parade And A Charade’ Hint At?

One of the biggest questions about the eighth episode of When Calls The Heart Season 8 is the title. It is called “A Parade and A Charade.” This is a bit of a mystery.

What we know about this episode is that Elizabeth will be making progress with Angela in learning braille. In addition, Lee and Rosemary are going to discover that being a parent can be challenging.

Does When Calls The Heart Reveal More About Jack’s Death?

Hearties know Elizabeth is working on moving forward from her loss of her beloved Jack Thornton. At the beginning of When Calls The Heart Season 8, she had two good men actively pursuing her. Now, she has moved on with Lucas. But, Nathan is not quite out of the picture.

Lastly, Nathan reveals something very shocking about Jack. What exactly has he kept from Elizabeth? Was he there when Jack died? Or is there something else?

It has been several years now. Could Elizabeth ever forgive Nathan for hiding something so important about her late husband?

Don’t forget to catch the premiere of When Calls the Heart’s Season 8, Episode 8, entitled “A Parade and A Charade.” This airs on Sunday, April 11, at 9 p.m. Eastern, on the Hallmark Channel.