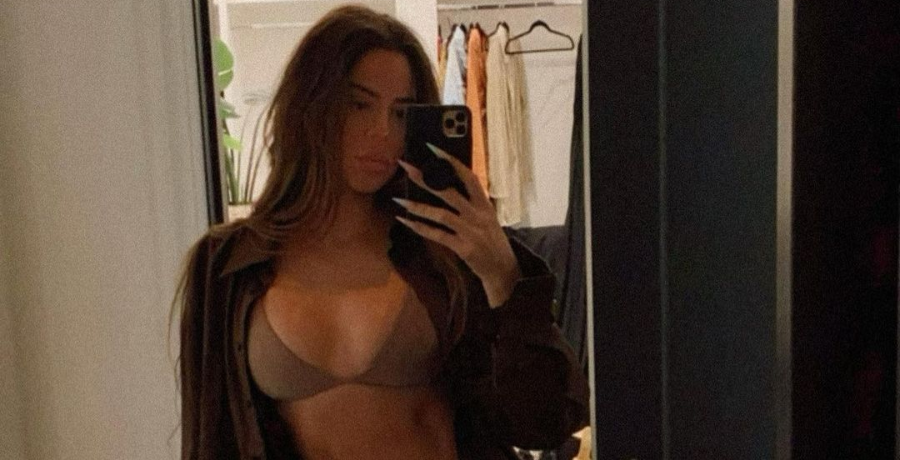 Khloe Kardashian has been the target of plastic surgery rumors. Add that to the mysterious bikini photo of the reality star that disappeared from the internet, and there are even more rumors and accusations. Earlier this week, TV Shows Ace reported about fans going wild over Khloe’s latest ad for Nurtec. They felt like it was a face reveal rather than a commercial for prescription migraine medication.

Khloe has caught onto the talk about her ever-changing looks. She previously spoke out about the comments. Now, she’s baring her soul and her naked body. On Thursday, April 8, Khloe posted a statement via her Instagram page. In the lengthy message, she revealed the insecurities she’s dealt with over the years.

The Revenge Body star posted a clip of herself nude in her bathroom. Khloe Kardashian checks out her body in the mirror as she films the video. She followed up with another video of her looking at herself in the mirror. She takes off her sweatshirt while talking to one of her sisters, and then hikes up her thong underwear in order to accentuate her hips.

The 35-year-old wanted to address the bikini photo controversy. Over the weekend, someone posted a photo of Khloe in a leopard bikini without her permission. However, that didn’t stop fans from posting the photo. The Kardashian family’s lawyers went after the fans across all social media platforms. In her post, Khloe explained the reason why she didn’t want that photo to get out.

“But as someone who has struggled with body image her whole life, when someone takes a photo of you that isn’t flattering in bad lighting or doesn’t capture your body the way it is after working so hard to get it to this point – and then shares it to the world – you would have every right to ask for it to not be shared – regardless of who you are.”

Khloe admitted that the constant comments over her looks have gotten to her. It’s gotten so bad that she resorts to makeup and filters. She argued that it’s her “choice” for how she wants to look in public and on social media. While Khloe admits she’s “not perfect,” she tries to live “my life as honestly as possible and with empathy and kindness.”

Khloe Kardashian loves to interact with her fans on social media. When it came to this post, she received much praise from not only her fans but also her friends and family members. However, her message wasn’t all about her. She also had an important message for her fans.

“For those else who feel the constant pressure of not ever feeling perfect enough, I want you to know I see you and I understand,” Khloe continued. “Every day I am told by my family and friends who love me that I am beautiful but I know that it needs to be believed from within. We are all unique and perfect in our own way.”

The Good American founder told her fans: “Just do you and make sure your heart is happy.” The Keeping up with the Kardashians star addressed her own body struggles in her honest message. Of course, there was criticism among the praise.

While Khloe Kardashian admitted her own insecurities, critics argue that she and her family reinforce unattainable ideas of how women should look.

“But again you guys are the ones who are setting those standards for yourself, all you have to do is love yourself in whatever shape and form you are,” one fan argued.

“Your family is responsible for setting those unrealistic standards,” a second user chimed in.

According to them, instead of directly addressing her body image issues, she continues to make a profit off them. She has created an entire brand from her Revenge Body book and TV show. Some think she should also address the type of work she had done. They feel that posting more unedited photos will create more harm than good.

Khloe argued that she had an Instagram live so people could see her real body. The star wrote in the caption: “Yes I did a live to show you all this isn’t photoshopped.”