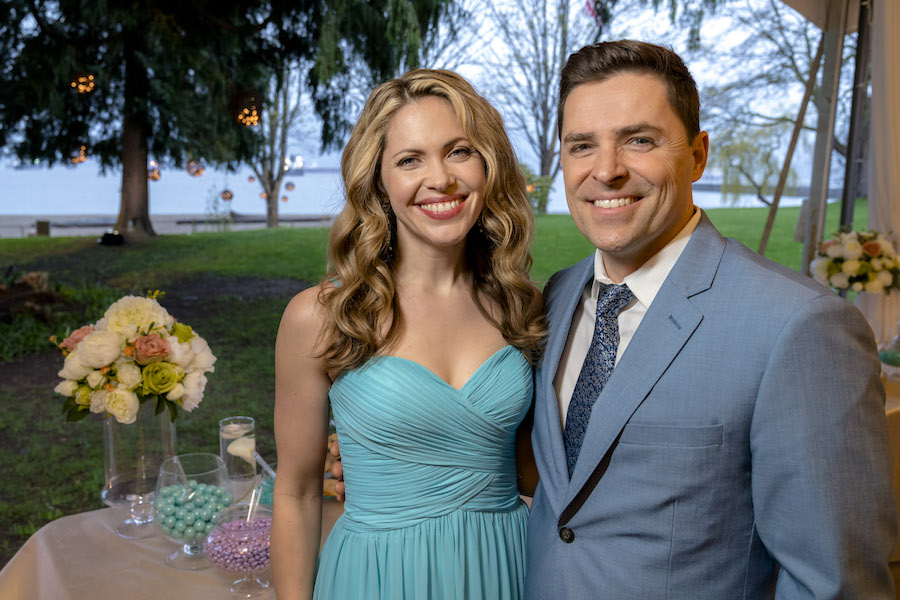 Hearties should be thrilled that after When Calls The Heart Season 8 ends on May 9, they will only have a month until they see their favorite couple, Pascale Hutton (Sanctuary) and Kavan Smith (Stargate SG) on the Hallmark Channel. That is because they will be starring together in You Had Me At Aloha, a Summer Nights movie. The couple has already starred together in The Perfect Bride movies.

This is what we know about their upcoming movie, and why people think that Pascale and Kavan are married IRL.

All About Hallmark’s You Had Me At Aloha

According to ET,  You Had Me at Aloha is a Summer Nights romance. When the host of a popular travel show resigns, the network enlists Paige (Hutton), to step in for the next season set in Hawaii. Unbeknownst to her, they have also hired Ben (Smith), who likes to push everything to the extreme.

As these two new co-hosts clash over their opposing ideas for production, they grapple with the fact that not only do they need each other to further their careers, but they also balance each other on and off the screen.

Catch the premiere of You Had Me At Aloha on Saturday, June 5, on the Hallmark Channel. Premiere time and encore showings are forthcoming. Moreover, this movie scenario seems to be tailor-made for Pascale and Kavan. For although the two now work together seamlessly, it did not start that way.

When it comes to this When Calls The Heart couple, Rosemary and Leland Coulter, Pascale and Kavan are so good together, people assume that they are a real-life married couple. However, the Hallmark stars are not. In addition, once upon a time, when they first met, they had the opposite of a meet-cute. There was major friction.

According to an interview on Home & Family, reported by Country Living, Pascale and Kavan had a horrible battle from the get-go. First of all, Pascale went off-script. She thought it would be funny to shove a spoonful of food into his mouth.

However, Kavan was not having it. She continued to try. We are talking 16 takes! Subsequently, they both started laughing hard. To this day, they both find ways to make the other laugh.

You Had Me At Hello Filmed In Hawaii

Feel the need to travel via your couch? They filmed Hallmark’s You Had Me At Hello in Hawaii. According to Pascale’s Instagram, they just wrapped their upcoming movie. She wrote, “That’s a wrap on You Had Me at Aloha and I just want to share my profound gratitude to the beautiful island of Oahu and our talented crew here in Hawaii for bringing the spirit of Aloha to our little movie. This was a dream project for @kavansmith & me and I can’t wait to share it with all of you on June 5th on @hallmarkchannel.”

Hallmark’s You Had Me At Aloha premieres on Saturday, June 5, on the Hallmark Channel.