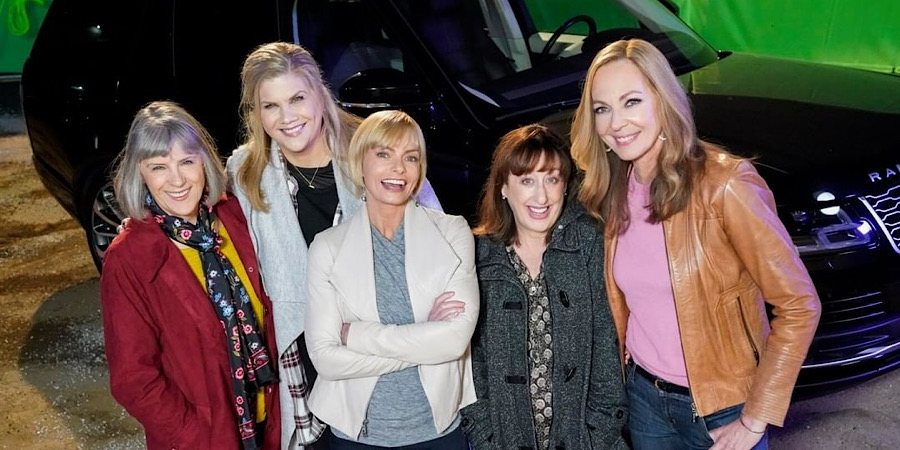 Last time on Mom, Bonnie was skeptical of her sponsee, Rod getting too friendly with Adam. But they got along really well and Adam helped Rod open up his emotions. He let down his bravado when he was around another male who was not a bandmate. Rod also found himself having banter with Jill which ultimately resulted in them sleeping together. She is fresh out of her relationship with Andy and off her crush on Bonnie’s therapist, Trevor so this could be very bad. Now, Rod needs a new sponsor and everyone is seemingly very uncomfortable. The final season returns after a handful of weeks off with Jill and Rod trying to cope with the mess they made.

Bonnie is waiting for Adam to come home. She has a whole picnic/Southern Belle-themed set-up for him but he immediately tells her to come with him. They start driving on the highway and he stops in front of a huge billboard. He tells her to look up and it’s an old picture of Christy from when she was a stripper. The club she worked at when she was an addict was still using her as a promo.

It’s been over twenty years but this photo is following Christy. Bonnie won’t tell her but she takes the ladies to see it. They are blown away because they knew she had a past but had never seen this side of her. Marjorie feels lucky that all of her wrongdoings were done prior to social media. Jill and Tammy were not that lucky. Bonnie goes to speak to the manager of the club. He was the DJ when Christy worked there and he remembers her.

Bonnie tells him how far Christy has come and how the billboard could impede on her career. She asks if it could be taken down but he says it is still a moneymaker, even after all these years. Bonnie uses several angles but ends up getting thrown out of the club.

Jill and Rod Can’t Get It Right

After sleeping together, Rod has been avoiding Jill at all costs at the meetings. She still tries to be cute but she is mad. He ends up going to see Adam at the bar to ask for his advice. Adam has a whole new perspective on things since he saw Christy’s billboard. He now knows any woman is somebody’s daughter and that haunts him. This leads Rod to phone Jill and invite her down to the bar to chat.

Bonnie has enlisted Tammy to help her paint over Christy’s body but Marjorie catches them and says they need a meeting. At the meeting, Bonnie realizes this is not an alcohol issue but rather a motherly instinct. She bolts out and Tammy asks if they should follow her. Marjorie thinks she will be fine because Tammy drove them. This is until they realize Bonnie stole her keys. They enlist Wendy to drive them to the billboard to stop her and call Jill on the way. She had met Rod at the bar and they decided to be friends. It did not work so well because they started hooking up in her car when she got the call to help.

All the women raced to Bonnie but she appealed to Marjorie’s mothering side as she has a son. They all end up on top helping her paint and fixing Christy’s future.

Only six episodes left of the season and then it’s good-bye to Mom. Don’t miss the final season Thursdays at 9 pm only on CBS.

What Does Nikki Bella and Artem Chigvintsev’s Relationship Look Like Today?
‘General Hospital’ Weekly Spoilers: Drew Cain Is Back Bearing Tragic News
Hannah Brown Spills All – Who Was Better In Bed, Peter or Jed?
Will The Bates Family Out-Populate The Duggars?
Pete Davidson Prepared To Be Step Daddy Of Kim Kardashian’s Kids?