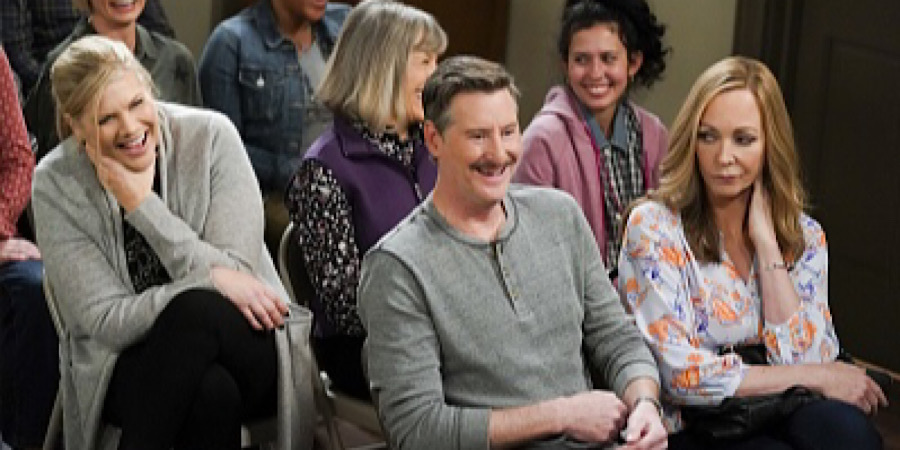 Last week on Mom, the ladies learned Wendy had a secret boyfriend. At the same time, Marjorie got dumped via text. And Adam showed what true love was by celebrating Valentine’s Day at a fancy restaurant with all of them. He let them know they were all very much loved by him. When he married Bonnie, he essentially married them and their quirks.

Bonnie and Adam Are An Inspiration on Mom

Occasionally two people will speak at the meetings to inspire. This week it was Adam and Bonnie’s turn as a married couple. Bonnie felt super confident because she believes everyone loves her brave girl story. She gets up and tells it and the attendees reluctantly clap. But it is Adam who gets the most praise. They cannot believe how funny and charming he is. The fact he can be so upbeat and lively after being married to Bonnie is a real testament.

Bonnie has been sponsoring a rock star she had a past with, Rod since early in the season. He takes a liking to Adam and they have tea at The Bistro while the ladies have coffee. Bonnie is not a fan of this pairing but Marjorie thinks it is fine for them to mingle. They guys end up making plans to hang out further which Bonnie still does not approve of. When they do get together, Rod confesses he has always had to act like someone else to impress the ladies. What it boils down to is he never had a dad or real male friends so this is what he is really missing.

Upon having this realization, Bonnie comes home and Rod fires Bonnie as his sponsor. But he is clashing with someone else. Whenever he sees Jill, they throw jabs at one another. She is out shopping as retail therapy when they run into each other. He is trying on the same shirts as she is and she feels he is ruining the one thing she loves.

Rod continues to hang out with Adam and as Rod is leaving the house, Jill is coming by. She gets so mad because they are wearing the same leopard shirt. Rod breaks down in front of her and confesses he always feels he has to have a front on in when she is around. It is much like her purse which shows how wealthy she is. They end up kissing passionately. This is just as Bonnie tells Adam she has to show the apartment across the hall.

As Bonnie is going to the apartment with prospective new tenants, she finds Jill and Rod naked on the apartment floor. At the next meeting, both Jill and Rod are avoiding each other but Bonnie sends Rod to Marjorie for advice. Will they end up together? Find out when the final season of Mom airs Thursday nights at 9 pm on CBS.