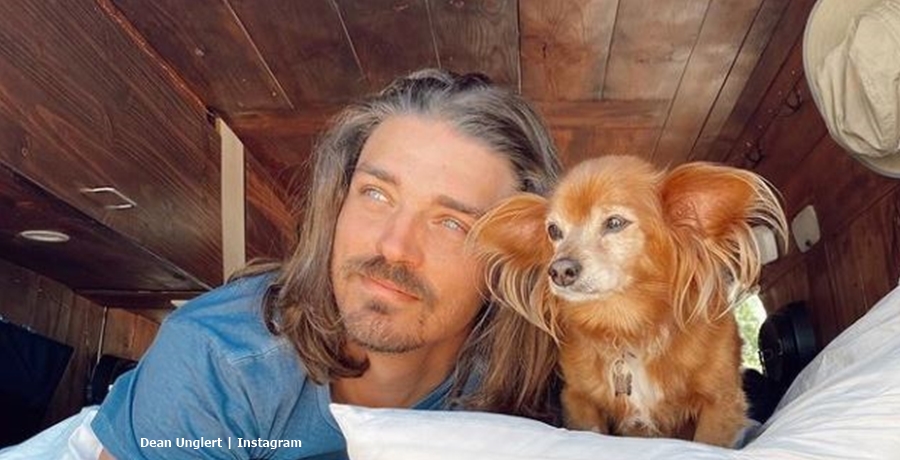 Dean Unglert’s dog Pappy stole the hearts of Bachelor in Paradise fans over a year ago. Actually, fans took to him straight away when he and Caelynn Miller-Kayes fostered him. Since then, the pup underwent a bit of remodeling. In fact, veterinarians fixed his snaggle tooth. An instant hit with ABC fans, Pappy became an Instagram influencer. These days, fans see him in many videos and photos. Now, on Monday, March 29, Dean told fans that Pappy’s going to be a “Victoria’s Secret supermodel.”

The Bachelor in Paradise star probably only joked about his dog. In fact, he might not join the stable of Victoria’s Secret supermodels. Nevertheless, some fans agreed that he looks super-cute and classy. If you don’t know, the old doggie rocketed Dean and Caelynn’s popularity stakes.

In June 2019, they visited a shelter with the idea of fostering a dog in mind. There, they saw Pappy. Later, at another shelter, they found Pappy again. So, they decided that fate meant he became part of their lives. Eventually, they adopted the doggie and fans cheered.

Since then, Dean Unglert’s dog Pappy traveled around in the RV with the Bachelor in Paradise stars. Meanwhile, ABC fans clamored for more photos and videos. Obligingly, both Caelynn and Dean keep their social media feeds packed with photos of him.

Although he came with a host of age-related health issues, they clearly give him a wonderful life. Actually, Dean admitted that his dog won his heart with his utter “loyalty.” Now and then, he shares loads of photos which he calls “Pappy Appreciation” pics. Exceeding impressed, fans now agree he’ll make a wonderful “Victoria’s Secret supermodel.”

Dean’s an excellent photographer. However, maybe it’s not a joke that Dean Unglert’s dog Pappy models for Victoria’s Secret. Caelynn’s partner sometimes comes out with humor that later turns out no joke. Interestingly, his batch of photos this week came geotagged as Hollywood. Actually, they look really professional. Anyway, joke or not, BiP fans love them. Dean captioned his post with:

Interestingly, there’s a link between Dean Unglert’s dog Pappy and his name. Over the years, Victoria’s Secret produced their Snappy Pappy bras and their Strappy Logo Cheekster.

Man this dog gets me every time. What a beauty.”

I don’t even know you, but am crazy about this pup!!!! He’s adorable! Love all the pics y’all share of him! Makes me smile every time! 😍”

Give that boy a contract.🥰”

I will buy whatever he is selling!”

Soon, Dean Unglert’s dog Pappy enjoys an even better life. In April, Caelynn and Dean move to Las Vegas. Happily, their new place will give their adorable doggie space to run around in. Actually, if Pappy isn’t really becoming a Victoria’s Secret supermodel, maybe the famous brand should consider it.

Do you agree? Go ahead, sound off your thoughts in the comments below.