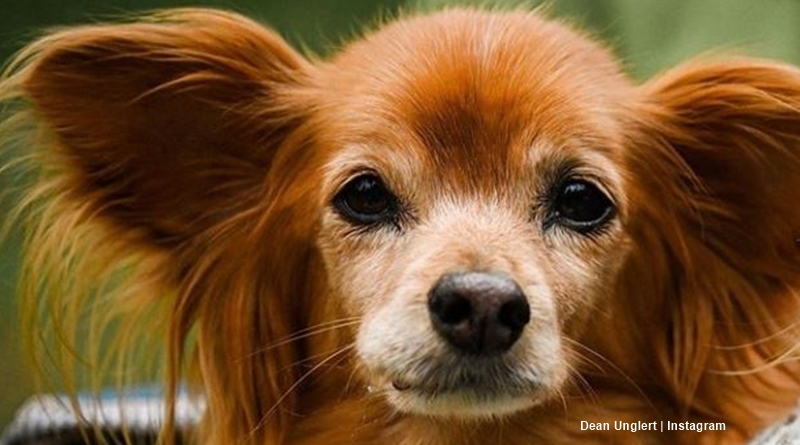 Bachelor in Paradise fans love it when Dean Unglert shares photos of his rescue dog, pappy. And, Dean takes some awesome photos. Now, he shared a “Pappy Appreciation” post. All three photos really look adorable. But, one of them is funny in a clever way, fans think. However, it shows that the BIP star has really got an eye for a picture that tells a story.

Pappy, the little gentleman that Dean and Caelynn Miller-Keyes adopted got fans falling in love. He suffered some health issues but looks way better now than he used to. The ABC couple took him for work on his teeth and Dean said he’s way happier now. They take their little old doggie with them when they go hiking and camping out in the wilderness. Fans think the Yoda look-alike dog found real heaven for his golden years.

The BiP star often shares cute photos of Pappy. And, Caelynn always includes some shots of him in her vlog on YouTube. One cute set of pictures came back in April when they visited Oregon. In a photo that the Bachelor In Paradise star shared, he and Pappy sat outdoors looking at each other, we reported. Pappy and Dean twinned with the same knitted hats. Plus, Pappy wore a doggie vest the same color as Dean’s. The cute picture revealed how much they love each other. Now, Dean shared some photos and captioned them as “Pappy Appreciation.”

Three photos and one is funny in a clever way

One picture showed Pappy worn out and lying plunked down 0n a sofa. His tongue lolled out. He sure looked like he enjoyed a great day exploring and settled down for a snooze. Another picture showed him all bundled up in a blanket, with his golden-colored hair gleaming. He looked rather regal, relaxed, and enjoying being spoiled. But the third photo revealed Dean Unglert’s sense of humor. In fact, it totally suited the caption, “Pappy Appreciation.”

In that photo, Pappy stood and looked at a bearded dragon lizard with a wary expression on his face. The funny part is that the BIP alum managed to catch the animal looking very similar in color, displaying hues of Pappy’s hair coloration. The picture almost suggested the reptile appreciated Pappy so much that it wanted to look like him. Fans who own beardies totally appreciated the photo by the BIP star. Those who own them know that the reptiles actually have quite a lot of personality as well. These two personable creatures really look good together.

One fan said, “love beardies and dogs relationships! My boyfriend has a bearded dragon and his dogs are so patient with her! 💕💕💕.” Another BIP fan asked why it’s an orange-colored lizard. But, those in the know explained they present a wide variety of colors.  What did you think of the “Pappy Appreciation” photo? Did you think it looked rather funny in a clever way? Sound off in the comments below.