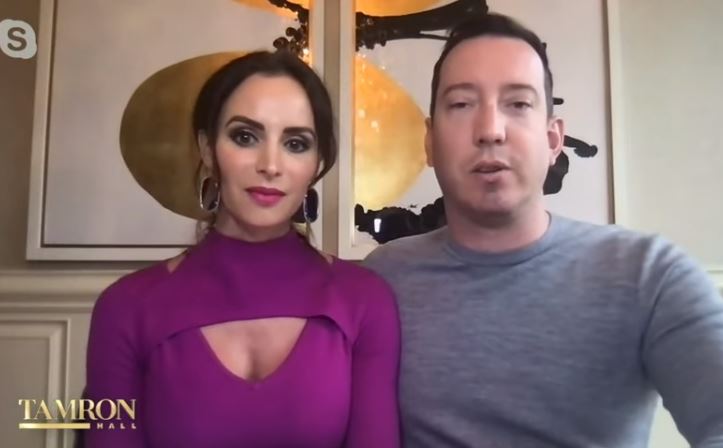 On Wednesday’s The Tamron Hall Show, NASCAR stars Kyle Busch and his wife Samantha Busch open up with Tamron Hall and discuss at length their fertility struggles and their journey to get through Samantha’s miscarriage.

Tamron Hall also shared her own difficult journey to her pregnancy and the birth of her son, Moses.

IVF treatments are expensive and uncomfortable, some of them even hurt, according to Samantha and Tamron.

What happens on Tamron Hall with Kyle Busch and Samantha Busch?

The book details the couple’s struggles with getting pregnant, the emotional and physical difficulties that come along with IVF treatments, and the ongoing challenges the couple experienced while they mourned over Samantha’s miscarriage.

Hall commiserated with the couple as she underwent IVF treatments to conceive her son Moses. She shared details from her own experience.

The Clips On The Busch Fertility Journey

Kyle on the challenges of sharing the couple’s fertility issues while working in the traditionally male-dominated world of NASCAR:

He said: “I mean, obviously, it’s a challenge. Anything that you look at infertility is a challenge. And, you know, as we have always kind of been very open. Our lives are literally broadcast on television each and every weekend being out there and being a part of a national sport, but you know, the personal journey and everything you want to keep under the towel for infertility and stuff, you know, when we were starting to go through it, we were trying to research and look about it and find out some information. And well, what does this mean? Where do we go?”

“And there wasn’t a whole lot out there. And there wasn’t a true from start-to-finish told story that we could really find, and we had to piece together a lot of information. So I think that’s where Samantha comes into play with sharing our story, putting it all out there, being able to then, you know, write it into a book here with Fighting Infertility, and share our full journey, our full experience, and our full journey and experience isn’t going to be the same as the next person, but at least it’s a basis.”

Kyle on the couple’s decision to seek therapy following Samantha’s miscarriage in 2018:

“And so there was a bit of a disconnect between the two of us and our communication wasn’t flowing as easily between each other and being able to communicate the way that she was feeling, I was feeling, and so we sought help. And you know, that was the biggest thing that kind of helped us talk to one another and to be able to get through the struggles.”

Samantha on using her platform to support other women and couples struggling with fertility issues:

She said: “I think when everyone’s on Instagram, they’re posting pictures of happy couples and doing the [progesterone] shots together, you know if you’re having troubles in your marriage, you’re looking at that and saying, ‘Why aren’t things like that for us?’ And so we wanted to put it out there that not everything that you see on social media is rainbows and puppies, it’s hard times and there’s hard conversations.”

“And we wanted to put in there that we did seek the help of a therapist in order to learn how to re-communicate with each other through these trials. And I think you know, by sharing that openly in the book, and on social media, I’ve had so many couples reach out and say, ‘Thank you. We were inspired to go find a therapist or a support group ourselves.’”

She said: “I have to be honest with you, being in the IVF clinic, for a while I did feel guilty for being able to afford it. I felt like the game was rigged and although I grew up very poor, a 19-year-old single mother brought me home, that now I had an amount of money that put the odds in my favor in some way.”

The syndicated series The Tamron Hall Show has a zip code finder that tells you where to watch in your market here.