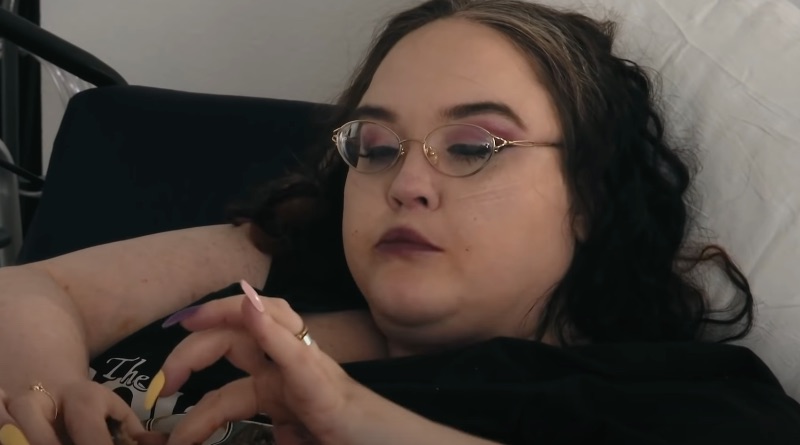 My 600-lb Life recently introduced viewers to Samantha Mason. Her source of income both pays her bills and fuels her eating habits as a specialty model. What is she up to since filming on her episode wrapped?

Samantha Mason is a relative newcomer to the My 600-lb Life list of cast members. Her episode aired back in December of 2020. And she was introduced to TLC audiences in an interesting way. A lot of the time, stars can’t work due to their sheer size. In addition, they often have to rely on family members to be their caregivers.

In Samantha Mason’s case, she may not be able to work your typical 9-5 job. But she found an interesting way to pay the bills. It turns out; people pay to watch her eat. While that’s certainly an unconventional way to make money, all she needs is a camera in her apartment. As a bonus for her, she gets to eat the food that she loves – while getting paid for it.

Unfortunately for Samantha Mason, what she does for a living is the very thing that puts even more stress on her body and health. Along with her health problems, there’s also the fact that being in front of the camera gives Samantha Mason a confidence boost. Rather than being seen negatively, a lot of her viewers tell her how beautiful she is. So, that’s one of the things that makes it harder to let go.

By the time she got to Dr Now in Houston, she was over 800 pounds. Beginning a weight-loss journey is tough for anyone on his program. But this was going to be especially tough for Samantha Mason – since keeping the weight on is how she pays her bills.

Back in October of 2020, Samantha Mason revealed that she went under the knife. In addition, she said she lost 320 pounds since May of that year. So that’s certainly progress for the My 600-lb Life star. Going under the knife included removing 80 pounds of dead tissue. Meanwhile, the TLC star added that she dropped 114 pounds from the surgery alone.

Meanwhile, even though Samantha Mason continues making progress, the My 600-lb Life star added that she still battles a food addiction. Even if the number goes down on the scale, addressing that addiction to food is a fundamental part of any weight-loss journey. This is especially true when it comes to keeping the weight off for the long haul. At least in Samantha’s case, she acknowledges that it’s an issue. So, that could be the first step toward kicking the addiction for good.

See Jinger Vuolo’s SHOCKING Before & After Transformation Photos
‘In Pursuit’ Of Dirtbags: The Walsh Team Ask Viewers For Help Ahead of Season 3 Premiere
‘The Grand Tour: Lochland’ Released, Will Covid Derail Next Season?
Did Stassi Schroeder Bully Someone On Instagram?! What Happened
‘Love Island USA’: The SHOCKING Reason Leslie Left The Villa