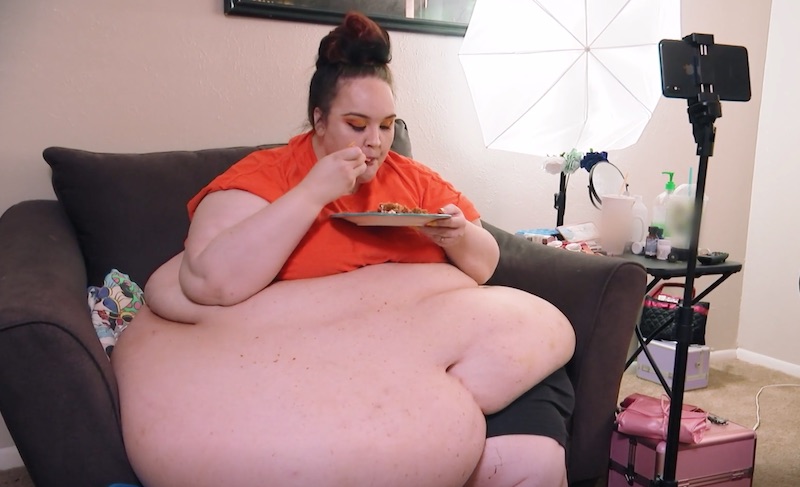 My 600-lb Life star Samantha Mason sought Dr. Nowzaradan‘s  help in losing weight. Dr. Now put her on a strict diet and later performed Gastric bypass surgery on her. However, Samantha is now saying that she was exploited by the popular reality show. Are the rumors true? Or is she just upset with the outspoken Doctor?

Back to the beginning of Samantha Mason’s Journey

35-year-old Samantha Mason started her weight loss journey at an astounding weight of nearly 1000-lbs. The deciding factor to lose weight was her daughter Isabella. She said that she didn’t want to put her daughter in “the dead parent club.” Furthermore, Samantha really wanted to live to see her only daughter graduate school.

She was getting paid to gain weight

In Season 9, fans watched as Samantha struggled to gain her life back. It was clear that she had a tough time stopping herself from overeating. For income, she decided to turn to the dark web. She would get paid to eat large meals on camera.

“I just eat what I want and they pay for it, as long as I film it. So that’s how I make a living and keep going, and it makes me feel appreciated so I’m happy to do it,” she stated. She turned to this sort of employment due to regular employers not hiring her. This was due to her massive size. Dr. Now stepped in to help save her life with emergency surgery.

Ultimately, she did good!

Samantha started to lose weight thanks to Dr. Now’s help! Thanks to him, she is now healthier and down to a lighter weight. However, after her episode aired, Samantha took to social media to allege that everything was not as it appeared to be. She began spewing allegations on social media, which gained a lot of attention from fans of Dr. Now. 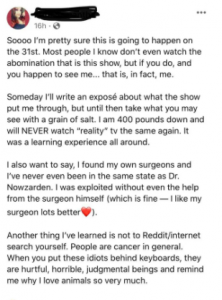 A Redditor shared an alleged screenshot of Samantha’s Facebook status where she talked about her experience on the show was terrible. “So I am pretty sure this is going to happen on the 31st. Most people I know don’t even watch the abomination that is this show. but if you do, and you happen to see me…that is, in fact, me,” she began. She continued by saying she would expose the scandal with details. She also claimed that everything people see on the show should not be taken seriously. implying that some of the show is fake. “I am 400 pounds down and will NEVER watch ‘reality’ tv the same again,” she stated, according to Meaww.com

Do you think there’s any truth to Samantha’s allegations? Let us know in the comments down below.

‘Bachelor’ Couple Shares Six Year Anniversary
‘OutDaughtered’ Star Uncle Dale Goes South
When Does The Next Episode Of ‘This Is Us’ Air?
‘Love After Lockup’s Dylan Smith Sends Message From Jail
‘Dirty Jobs’ Host, Mike Rowe, Mourns The Loss Of A Friend