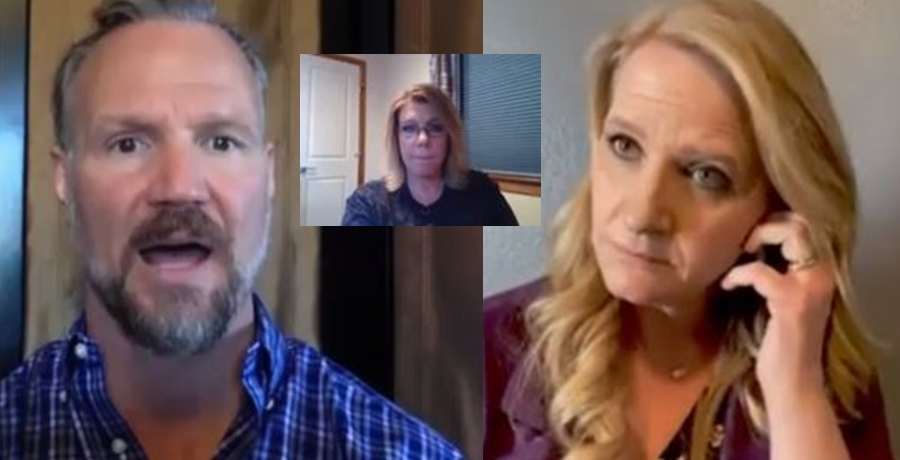 Sister Wives fans follow the deteriorating relationship between Meri and Kody Brown and even Christine feels some sorrow about it. Fans know she’s super-jealous of the other women in the family. So, it’s probably worse than fans know. Ever since the catfishing incident in 2015, despite all her efforts, Kody seems unforgiving and downright cruel sometimes.

Previous seasons of the TLC show revealed that Kody regrets ever marrying Meri. Each season, fans see them visit therapists trying to find some way back. But in the current season, Kody seems disinterested. The coronavirus pandemic made the situation for the whole family harder. And, teasers reveal that on March 21, Kody confesses that these days, they hardly ever see Meri. On occasions, she meets up with the rest of the family. As for Kody, he only sees her “once in a blue moon.”

The Sister Wives couple don’t even seem like frenemies these days. Kody claims he never calls her. But mostly, it seems she’s alone. In fact, he never takes Meri out on a date either. Naturally, Meri stresses and feels unhappy. So yes, more tears flow on the show. She misses physical touch and hugs and talks about not getting enough to survive. While fans urge her to just get out, Meri seems determined to stay for the family. But even that seems to take a toll on people like third wife, Christine.

US Weekly reported that Christine opened up about the problems between Meri and the Sister Wives patriarch. She indicated that the whole situation becomes almost unbearable for her. Christine wishes that somehow, she could do something about it. However, nothing she says really might make any difference to Kody. And, “It’s been really, really sad,” she noted. Over on Instagram, fans see how hard Meri works on herself. She tries to look and sound positive, but she seems stuck with nowhere to go.

The Sister Wives mom of Mariah almost seems to come over as if her continued presence in the family might help the situation somehow. But as Christine notes, “it’s super heartbreaking to watch.” Especially as Meri still nurtures so much “hope.” Christine admits that Meri comes with a “super-duper” strength of character. But it seems like she gets nowhere. Obviously, Christine points out that “every relationship goes through hard times.” Nevertheless, fans of the TLC show know that Meri and Kody went wrong years ago. So, it’s not just a sudden issue.

He has kids with Janelle so he has motivation to see her. Meri only has 1 child that is out of the house. He has said he has no reason to put energy into that relationship. What will happen to the others when their kids are gone?

If the other Sister Wives women feel that Meri and Kody Brown seem “heartbreaking to watch,” then Meri remaining with the family might impact them way more than she knows. Do you agree? Sound off in the comments below.

Clare Crawley SLAMMED For Shady Tweet About Matt James: ‘Mind Your Own Mess’
‘The Bold And The Beautiful’ Spoilers: Hope Makes A Shocking Discovery
Mykelti Brown & Tony Padron Share Baby’s Name – What Does It Mean?
‘General Hospital’ Spoilers: Anna And Valentin Kick Off A Dangerous Plan
Is ‘Sister Wives’ Baby Evie A Fashionista In The Making?