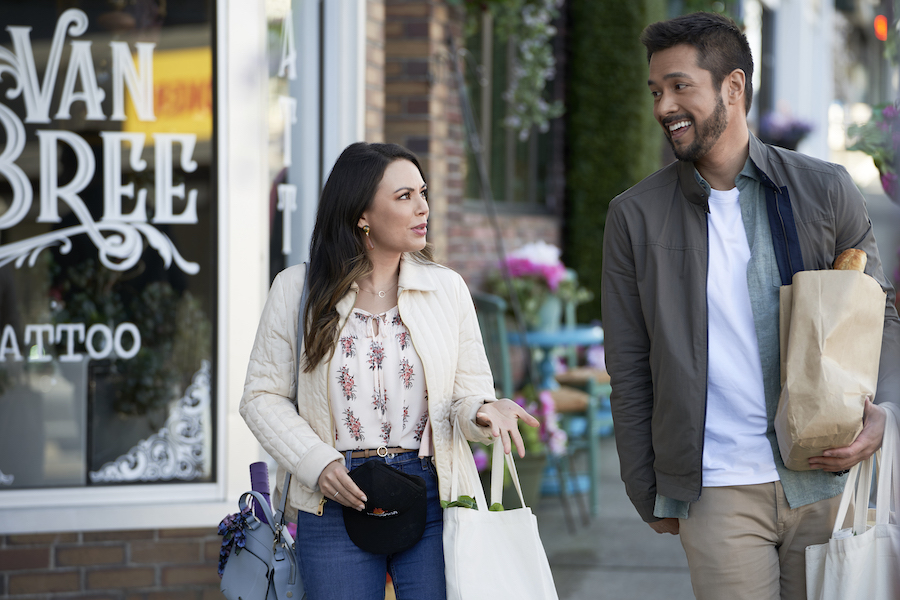 What Is Hallmark’s Right In Front Of Me About?

According to the Hallmark press release, Carly Mason (Parrish) owns her own bridal styling business, where her keen eye for fashion has her in great demand by brides planning high-end weddings.

She finds herself spending the weekend at a resort where several acquaintances from college are gathered for a wedding. Among them is Matt (Konechny), Carly’s unrequited crush from their days in the dorm.

Carly is invited to participate in the festivities and uses this as a second chance to pursue a relationship with Matt. Meanwhile, Nick (Grazzini), the resort’s junior chef, believes in his culinary talent. However, he hasn’t been able to convince the head chef to put his creations on the menu.

Carly is impressed with Chef Nick’s food and offers to connect him with her high-end clients. In return, Nick offers to help her catch Matt’s attention. Soon, both Carly and Nick begin to wonder if Matt is the right man for her.

When Can You Watch Hallmark’s Right In Front Of Me?

Today's the day, #Hallmarkies! Start mixing up your wine spritzer because we're kicking off #SpringFling in style tonight at 9/8c. Join Amy @cindy_busby & Mark #ChristopherRussell on their adventures in the all new movie #ChasingWaterfalls. Retweet if you'll be watching with us! pic.twitter.com/qYuhKZzEe4

Spring Fling is starting on Saturday. Moreover, what are the Hallmark 2021 movies? These themed movies start with the first day of Spring, airing a total of five movies. Each has a Spring theme that can include nature or renewal.

Starting, it is Chasing Waterfalls, starring Cindy Busby and Christopher Russell. This premieres on March 20, at 9 p.m. Eastern, on the Hallmark Channel. What’s the story about? The Hallmark preview states that Photographer Amy travels to a remote lodge to find mythical waterfalls and falls for handsome guide, Mark. They adventure to find the mystic waterfall and discover their true feelings.

Next is Don’t Go Breaking My Heart. Premiering on Saturday, March 27, at 9 p.m. Eastern, this stars Italia Ricci and Ryan Paevey. According to the preview synopsis, Miranda runs a boot camp for the recently broken-hearted. She begins to form a connection with new client Ben who is also a reporter, investigating whether her boot camp is a fad or a phenomenon.

Don’t forget to catch the premiere of Hallmark’s Right In Front of Me, on Saturday, April 17, at 9 p.m. Eastern, on the Hallmark Channel.

‘sMothered’ Mom Mary Cooper Revisits The Death Of Frank Canuto
‘Days of Our Lives’ Spoilers: Charlie’s Killer Revealed
Jo Shannon Unimpressed As Geno Messes Up In ‘Mama June’ Preview
‘The Bold And The Beautiful’ Spoilers: The Cops Think Thomas Is A Killer
Colton Underwood DRAGGED For Coming Out & Here’s Why