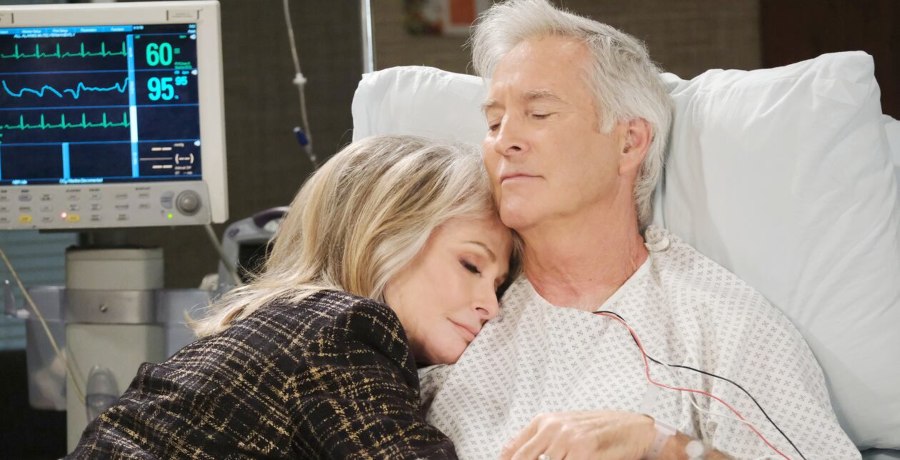 Days of Our Lives spoilers know John Black (Drake Hogestyn) very publicly threatened Charlie Dale (Mike Manning). Then Charlie was gunned down and murdered at close range. So his wife Marlena Evans (Deidre Hall) fears her husband’s unexplained disappearance coupled with his recent health issues is connected to Charlie’s death. Now she wonders perhaps her husband is the one who offed Charlie Dale on the NBC soap.

Days of Our Lives spoilers recall John Black had a tense run-in with Charlie Dale. He let the young man know in no uncertain terms that no one messes with his family. Charlie admitted to raping Allie Horton (Lindsay Arnold) and escaped prosecution. Then he went on to break John’s other granddaughter Claire Brady’s (Isabel Durant) heart.

John let Charlie know that there’s a price to pay if he hurt anyone in his family. Then just a few hours later, Charlie was gunned down and killed. Of course, half of Salem are suspects, but John is near the top of the list, say Days of Our Lives spoilers.

John Black cannot account for several hours the night Charlie Dale was killed per Days of Our Lives spoilers. For months now, John’s been dealing with erratic personality swings since his brain aneurysm. After making threats against Charlie, John goes missing and cannot explain where or what he was doing during that time.

Days of Our Lives spoilers say as word of Charlie’s death makes its way through Salem, John starts to question if he took justice into his owns hands. John believes he heard a gunshot. But was he the gunmen or just a bystander? DOOL spoilers tease John will have his wife hypnotize him to fill in the missing blanks of that fateful night.

Charlie has made a lot of enemies in Salem, but is one of them about to make him pay the ultimate price for his sins? Watch #DAYS, weekdays on @NBC. pic.twitter.com/AmysXyQSFL

Days of Our Lives: Will Hypotnosis Clear John While Incriminating Someone In His Family?

Days of Our Lives spoilers suggest John Black’s leery of hypnosis. Although the session could very well clear him and squash his fears of his involvement, it could likely reveal who really did murder Charlie.

John Black remembers he heard a gunshot before he blacked out. So if he remembers anything, it could clear him and possibly Sami Brady (Alison Sweeney). However, it could also implicate Allie Horton, Belle Black(Martha Madison), or a few other family members of his that made threats against the now-dead Charlie Dale.

Hannah Brown Talked About Living Up To Impossible Standards Of Pageant Life
Should ‘Sister Wives’ Meri Brown Audition For ‘Seeking Sister Wife’?
‘The Little Couple’ 2021: Zoey Freaks Out Her Dad With Brain Food
‘The Bold And The Beautiful’ Star Joe LoCicero Speaks Out On Vinny’s Death
‘My 600-LB Life’ Melissa Morris: Where Is She Now?