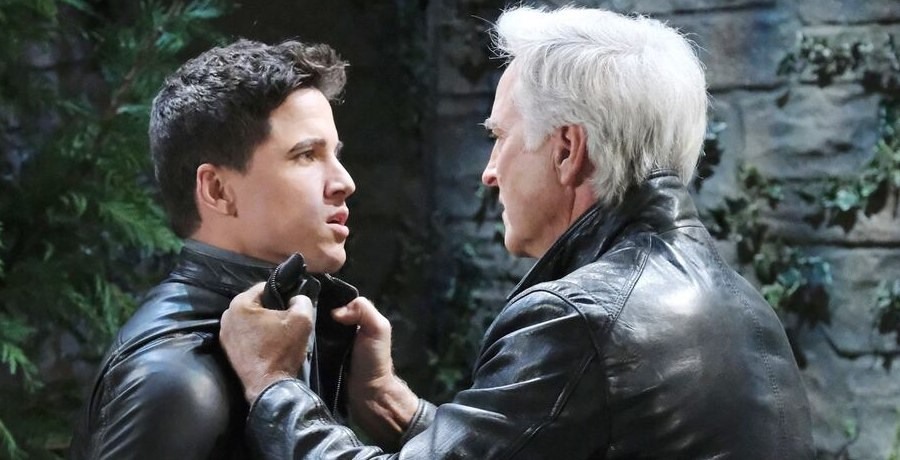 However, she’s got a lot of company on that list, including her stepfather John Black (Drake Hogestyn). This week Charlie’s dead, Sami’s back, John goes missing, and the hunt for murderer begins on the NBC soap. See who else is a potential suspect for murdering Charlie Dale.

Days of Our Lives spoilers say John Black has a run-in with Charlie Dale. John is a tough dude, and no one messes with his family. John has good reason to be angry with Charlie. After all, he raped his step-granddaughter Allie Horton (Lindsay Arnold). Plus, he dated, lied, and manipulated his other granddaughter Claire Brady (Isabel Durant).

So, of course, John takes the opportunity to put Charlie on notice. He might have been a bit aggressive, as he puts his hands on Charlie as he threatens him. Days of Our Lives spoilers tease John goes missing soon after this confrontation, and Charlie turns up dead. So Marlena Evans (Deidre Hall) is concerned when she learns of both events and wonders if her husband is responsible for Charlie’s murder.

Now we’re getting to the good stuff!! Next week – #Jarlena #DAYS pic.twitter.com/zqpWZai7oC

Days of Our Lives spoilers remind that Lucas Horton (Bryan Datillo) already threatened Tripp Dalton (Lucas Adams) when he thought he was the one who raped his daughter. He’s since apologized. Thankfully Tripp is the forgiving type.

However, the fierce papa bear side once again surfaced when Lucas and Allie ran into Charlie in Horton Town Square while with baby Henry. Charlie asked to see the baby, and Lucas lost his temper fast. So, of course, when Charlie’s dead soon, Lucas will certainly be asked for an alibi hint Days of Our Lives spoilers.

Days of Our Lives spoilers have Claire Brady setting a trap for Charlie Dale. However, Claire didn’t really master the art of undercover police work like her dad or grandmother. So, of course, Charlie outsmarts her. He’s a lot of things, but stupid isn’t one of them.

So, once Charlie busts Claire and snaps back at the woman he claims to love, Days of Our Lives spoilers tease Claire Brady might have a mental break. Certainly, this could happen as she’s still fragile from her past experiences. So when Charlie ends up dead, Claire could be the perpetrator.

However, she has a rock-solid defense of mental insanity. Her sharp lawyer (and mom), Belle Black (Martha Madison), will surely be able to get her daughter a cushy sentence at Bayview instead of Statesville.

#4 Ava Vitali Takes Out A Hit on Her Son?

Charlie Dale is not the son Ava Vitali loves reminds of Days of Our Lives spoilers. Charlie certainly has mommy issues. Recently he kidnapped her, drugged her, and planned to make sure she lived out her life doped up on drugs in a psych ward.

However, Rafe Hernandez (Galen Gering) found her in time. But, Charlie threatened his mommy dearest while she recovered in the hospital. So, did Ava Vitali call in a mob hit to take care of her youngest son? Spoilers tease this is plausible. Only time will tell if Ava had her son offed on the NBC soap.

Days of Our Lives comings and goings have Alison Sweeney returning this week as Sami Brady. In true Sami fashion, she makes quite an explosive entrance. Spoilers say Sami finds herself hauled off to the station and questioned about Charlie’s murder less than twelve hours after her feet hit Salem’s soil.

But let’s not rush to judgment. More people in Salem want Charlie dead than alive. The list of suspects is long. As it often is, the first arrest is rarely the one that sticks. So look for Sami to be accused and vindicated sooner than later on the NBC soap.