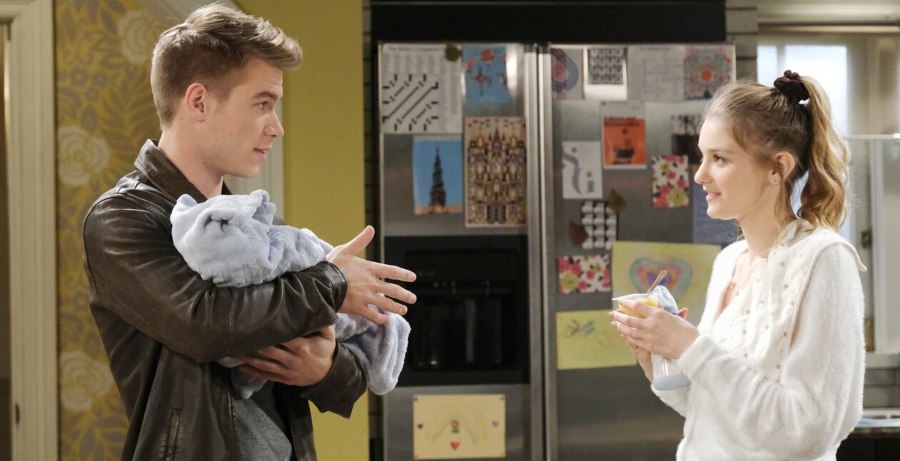 Days of Our Lives spoilers confirm Tripp Dalton (Lucas Adams) accepts Allie Horton’s (Lindsay Arnold) apology for naming him as her attacker. Of course, it took Tripp a few days to come to terms with this to proceed. Tripp was dragged through the mud.

Most of Salem owes him apologies, including his ex-girlfriend Claire Brady (Isabel Durant). Now Tripp and Allie seem on the path to becoming a couple. Will that pairing up resurrect the demons inside Claire and cause her to snap again on the NBC soap.

Days of Our Lives Spoilers: Tripp Dalton Decides To Be A Daddy To His Nephew

Days of Our Lives spoilers show Tripp Dalton feels a pull towards his half-brother Charlie Dale’s (Mike Manning) son. It makes sense since Henry is related to him, so he feels he owes the little man a positive role model. Charlie’s far from a model citizen. He’s a rapist, kidnapper, liar, and master manipulator. So Henry will benefit from having Tripp in his life.

Days of Our Lives spoilers recall Tripp Dalton shared this news with his father Steve Johnson (Stephen Nichols) after he spent the afternoon with Allie and Henry. Of course, Steve is proud of his son. However, you can tell Steve is still apprehensive about things between Tripp and Allie. Plus, just a few weeks ago, she was running around town blaming him for ruining her life.

Hey Allie, your father Lucas would like a word … #Days WTF? pic.twitter.com/uefyg7YinJ

Days of Our Lives spoilers see Allie Horton starting to fall for the man she once accused of attacking her. She’s admitted Tripp is not her type, but types change as people mature. Allie’s certainly grown up a lot these last few months. Motherhood has forced her to change her life and end her party-girl ways.

After spending time with Tripp, Allie realizes her son could use more men in his life. Henry’s surrounded by strong women, but strong male figures are few. Although her father, Lucas Horton (Bryan Dattilo), might disagree. Regardless. Allie is falling for Tripp, and the feeling is mutual, suggest Days of Our Lives spoilers.

Days of Our Lives: Claire Brady Not Happy Her Cousin and Ex Are So Cozy

Claire Brady and Allie Horton are not just cousins on Days of Our Lives but also best friends. Claire stood by Allie when she accused her ex-boyfriend Tripp Dalton of rape. Now Tripp has been vindicated, and everyone is starting to apologize for how they treated him.

Claire went as far as to try to trap her latest ex-boyfriend Charlie Dale into a confession to get justice for Allie. There’s not much she won’t do for her bestie. However, will Claire be cool with Allie dating her ex? Past behavior reveals Claire has quite a jealous side. Plus, the green-eyed monster in her is what usually gets the best of her and causes her to lash out. So once Claire sees Tripp and Allie together and realizes they might be more than just friends, will that set off the crazy side of Claire once again on the NBC soap.