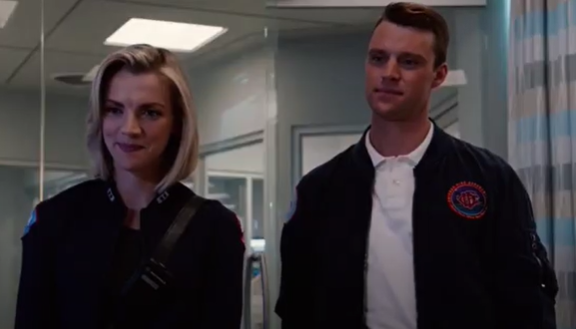 The relationship dynamics are one of the best parts of Chicago Fire, and the whole One Chicago franchise actually. But the couple drama has been heating up on all three shows lately, and everyone has an opinion. Fans love certain couples but hate others and it all boils down to how the actors play off each other in character. One of the most contentious couples on Chicago Fire is the pairing of Sylvie Brett and Matthew Casey. Fans are so divided over this couple it has gotten a bit crazy, but the actors have their own opinions about what will work best for their characters

Jesse Spencer (Casey) and Kara Killmer (Sylvie) did interviews on One Chicago Wednesday’s Virtual event about how they see the couple. And they talked about what they would like to see happen between Casey and Brett this season. By the way SPOILER ALERT.

Why all the reservations?

So, first off fans like both Matt and Sylvie are popular characters on Chicago Fire, so the issue is not with fans disliking either of them. The problem is that Casey was one half of the main couple on Chicago Fire for six seasons! Gabriella Dawson and Matthew Casey were “THE Chicago Fire couple” and Sylvie was Gabby’s partner and best friend for three years. Gabby left Chicago in Season 7 and made a one-episode reappearance in Season 8, but there are no plans for her to ever return at this point. But fans are up-in-arms about Brett and Casey being a couple because of the history between the three of them. And Jesse and Kara were even worried about that initially as well.

“I thought it was really interesting, because, you know, at some point, they were gonna want to move Casey along with his love storyline, his relationship storylines. And I think both me and Kara were a little concerned or just curious as to how they were gonna tackle that.”

Kara echoed Jesse’s reservations and has said before that as a fan of the show herself she had been invested in the Dawsey relationship. “I think at first, I was like, BLEH! Not because of [Jesse], just because I felt really invested in the Dawson/Casey relationship. I felt like, ‘This is so wrong!’ But then, like he said because if they had just, like, thrown them in bed together or something right off the bat and it was based around a very sexual dynamic, I think it would have felt just, not like the characters would have felt really weird.”

‘Chicago Fire’ did it right

But the writers and creators were well aware of the history that the couple was going to be facing and they did not ignore it. This was key in establishing a potential relationship between Brett and Casey. Brett and Casey were not an immediate option after Gabby left, because Brett was actually dating someone. In fact, there were no hints that the writers were even considering this direction for the couple until episode nineteen. But nothing came of the little sparks between the couple until Season 8.

“And we had time to adjust to it as well, in terms of, you know, thinking about another character in that way. It’s a mind shift. But it’s happened very organically. And it’s been great.” Part of what made the slow burn between Brett and Casey so effortless was that the Chicago writers just built their friendship. Brett took a lot of hard hits in Seasons 7 and 8, and Casey was there for her every time.

Kara spoke about this when asked why the relationship could work. “I think because their relationship has basically been marked … Sylvie’s just experienced so much loss over the course of the last two seasons. Like, she broke an engagement, she gained a birth mother and then she was completely devastated by her passing away, and then Foster also leaves, so she loses another partner. And I just think that at every step of the way, what the writers have done is just for as much loss as Sylvie’s experienced, Casey is always there trying to support her and encourage her and bolster her up. And I think because they wrote it that way, it’s easy to kind of fall in love with that dynamic.”

During an interview, the first fan question asked was “Do Kara or Jesse think Brettsey can work as a couple?” And Jesse jumped right on that. He answered “Yes” very quickly and went on to say, “Casey is quite reserved. Brett can be delightfully awkward, but I think there is a similarity there and a bond there almost that shall not be separated.”

Kara said that she took a little more convincing because she felt like Casey needed a “spitfire” that would challenge him and “put him in his place” every now and then. But she said, “[T]here’s a lot of different ways to do that. And another way to do that is to just be disarming and funny.”

Kara went on to describe Brett as a “total goof,” but she also said that Casey is a goof as well. However, he doesn’t feel comfortable showing that side of himself. But the point Kara made was that Casey and Brett bring out the good in each other. “I do think that he kind of brings out a more confident, mature side in her, and she kind of brings out the quirky, shticky part of Casey. And it is great!”

Brett and Casey as characters have always been overly self-sacrificial. Casey stepped away from Gabby without question in earlier Chicago Fire seasons because it was what she wanted. And Brett has said on multiple occasions that what would ultimately make her happy is to see Casey happy. These two care so much that they get in their own way to the extreme. But now that they both know about the other’s feelings things have shifted.

The Gabby issue came up right as the couple finally picked up steam. And Jesse had a couple of things to say about that, “It was going so well. That’s the thing that is so frustrating about it. They had such a good organic lead up to it.”

Brett is hyper-aware of the “girl code” and she was afraid that she would never measure up to Gabby. So, Brett tried to not be attracted to Casey. “But come on the guy went to find a cat with you, and drove you to your birth mom’s house. He’s always supportive, and he’s always encouraging. Their friendship is so good, and so it’s like dammit she can’t help it.”

Jesse explained there were no ulterior motives for Casey helping Brett, but things changed. “I feel like Casey is in self-denial about the whole thing,” Jesse said. “He was being a friend. […] and then when it crossed over into, oh this is [more]. Then it was too late.”

But the space they are taking is important. Kara comments on this time being necessary for Brett, “I think because Casey has sort of invested in her in a way that has given her a sense of self-confidence and being able to prioritize herself and her needs, that is what she is exactly what she is trying to do in their relationship.”

Jesse believes Casey needs to decide what he wants. “Gabby is gone. Why was he even bothering to dwell on this? He has got to look at what is in front of him. And now the possibility of losing someone who is new in his life is very real,” but he didn’t stop. “He needs to put his big boy pants on and ask [Brett].”

“Get ready for some angst.”

So, the characters are good for each other but they don’t know how to navigate their history. What could happen with that drama? Well in true Chicago Fire style, the answer is new love interests. Brett and Casey both caught the interest of new people in episode four, on the same call no less. A lieutenant at another firehouse took a shine to Brett and Casey connected with the victim. And not surprisingly but still disappointingly Casey ended up hooking with this person in episode six. And who would have guessed, Brett finds out.

Brett saw Casey “moving on” and she was really hurt that it happened so quickly. But Casey pulls the plug on it because even the other woman could see he was hung up on Brett.

With the potential new love interests introduced Kara hinted at even more roadblocks for Matt and Sylvie. However, she doesn’t know how things could work out, but she is hoping for a grand gesture on Casey’s part. Kara said, “I don’t know where it’s gonna go,” to which Jesse quipped, “Yeah you do. You know where it’s going.”

But both actors admitted that they would really like to see Brett and Casey become a couple. Jesse was very sure as he said, “They are gonna get over [the roadblocks]. They are going to move past them.” And he believes, “They will eventually get [back] together. I think they will get through the awkward bumps. And realize that their affinity for each other is greater than their issues.”

‘Wild West Chronicles’ Finale Exclusive: Artist Charles Russell Married Very Well
Proof Nic Kerdiles & Savannah Chrisley Are Back Together Surfaces?!
‘The Bachelorette’: 20 Things To Know About Blake Moynes
Lisa Rinna Sued For Copyright Infringement: What Did She Steal?
‘Young And The Restless’ Kyle And Summer Get Their Happy Ending?