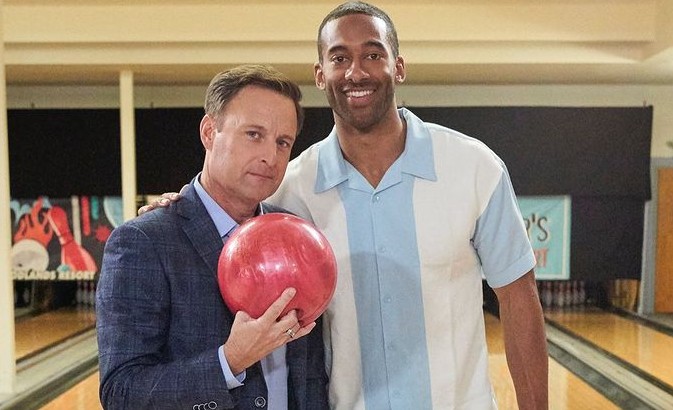 Things continue to heat up on The Bachelor. And they continue to heat up off screen as well. Rumors and accusations have been surrounding contestant Rachael Kirkconnell for weeks. She is one of the front runners who is falling in love with Bachelor Matt James. Host Chris Harrison spoke with former Bachelorette Rachel Lindsay on Extra Tuesday evening. In doing so, Chris was asked about the situation involving Rachael. His answer did not sit well with many. So, tonight, Chris is speaking out regarding the comments he made.

Yahoo Entertainment wrote all about Chris Harrison’s interview with Rachel Lindsay. When the subject of Rachael Kirkconnell was brought up. Chris appeared to defend the new contestant. Rachel didn’t like this at all. She kept pushing him further.

Chris said, “I haven’t talked to Rachael about it,” Harrison told Lindsay. “We all need to have a little grace, a little understanding, a little compassion. Because I have seen some stuff online — this judge, jury, executioner thing where people are just tearing this girl’s life apart and diving into, like, her parents, her parents’ voting record. It’s unbelievably alarming to watch this. I haven’t heard Rachael speak on this yet. Until I actually hear this woman have a chance to speak, who am I to say any of this? I saw a picture of her at a sorority party five years ago and that’s it.”

Rachel said, “It’s not a good look ever because she’s celebrating the Old South. If I went to that party, what would I represent at that party?”

He said he’s not defending the party but he’s simply saying people look at it differently then they did a few years ago. 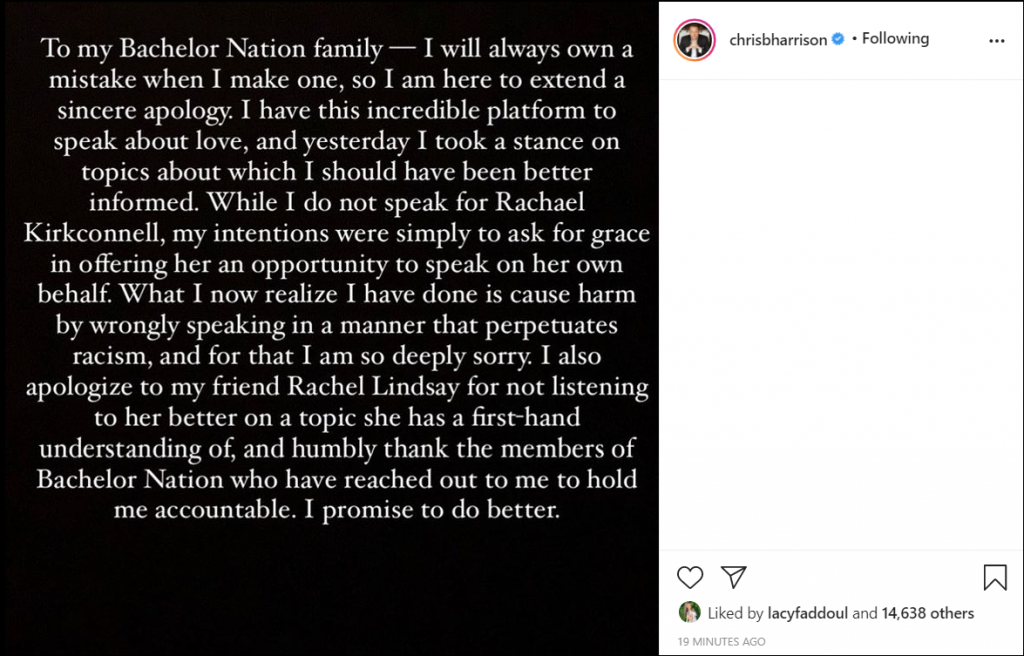 Tonight, Chris went to Instagram to share an apology to Bachelor Nation and to Rachel Lindsay. He said, “To my Bachelor Nation family- I will always own a mistake when I make one.” He went on to say he has a great platform to use for good. Chris said he spoke on topics with Rachel he knows not much about.

He went on to say he is not speaking for Rachael Kirkconnell but simply was asking viewers to give her grace and time to speak out. He also said he realizes now his words caused hurt and harm. And he apologized for anything that seemed to represent racism. He also apologized for not listening more to Rachel Lindsay since she has first hand experience dealing with racial situations. He ended saying, “I promise to do better.”