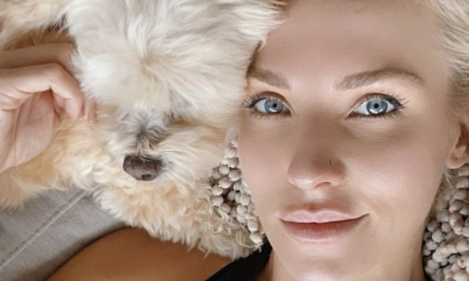 Starting a new relationship means getting used to a lot of changes. This is especially true if your new partner has children of their own. Dancing With The Stars pro Sharna Burgess doesn’t have any children. But her new man Brian Austin Green does. He has an adult son from a previous relationship, and then three young children from his marriage to Megan Fox. ET reports Sharna recently met the children Brian shares with Megan. Things are definitely getting serious here!

“Brian sees a lot of potential with Sharna and is curious to see how things blossom further,” an inside source told the publication. “Sharna has met Brian’s kids and they think she is super nice and get along swimmingly with her.”

“Brian loves how optimistic and positive Sharna is and how she is super driven and always smiling and laughing,” the source continued. “He admires that she does her best to enjoy life and lead a successful professional life as well.”

Fans knew a while ago that Sharna entered a new relationship. However, she tried her best to keep tight-lipped about it for as long as she could. But once fans spotted Sharna and Brian together at an airport on the same Hawaiian flight they knew. On their Instagram pages, fans could clearly see they were staying at the same resort. It doesn’t take a rocket scientist to put two and two together.

Shortly after their romantic getaway, both Brian and Sharna confirmed their relationship on Instagram.

It’s great that Sharna gets along well with Brian’s kids. She recently shocked fans and they thought she announced her own pregnancy. But it just ended up being an ad for birth control. But if things continue to go well between Brian and Sharna, things could change.

Divorces are never easy, but reports say that Brian Austin Green and Megan Fox are trying really hard to positively co-parent their children. Megan is now in a relationship with singer Machine Gun Kelly.

“There always seems to be some sort of issue between the two of them, but they do their best to keep the kids from knowing anything about any frustrations or difficulties,” the insider told ET.

And that’s exactly how it should be. Even if Megan Fox and Brian Austin Green don’t get along, they want to keep their children sheltered from their personal problems. It’s always nice to see parents trying their best.

Are you happy for Sharna and Brian? Would you like to see them have children of their own someday? Be sure to let us know what you think in the comments.