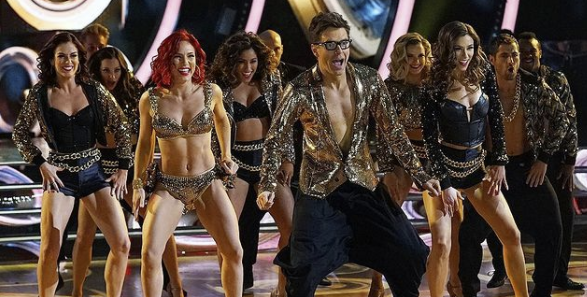 Dancing With The Stars pro Sharna Burgess and actor Brian Austin Green just made their relationship Instagram official. The two just went on a fun Hawaiian vacation over the new year, but their relationship is still very new. And that’s exactly why fans were so shocked when they thought Sharna posted a pregnancy announcement.

However, things weren’t all that they appeared to be. And DWTS fans expressed their surprise.

At first glance, fans really thought the Instagram post was a photo of Sharna looking at a pregnancy test. And it’s pretty easy to see how fans might jump to that conclusion.

However, it ended up being an advertisement for a birth control company Sharna partners with.

“I haven’t had to be on hormonal birth control for years so when it came time to get back on, my body really struggled. I tried the pill, but I experienced mood swings, weight gain, periods that were nearly knocking me out with fatigue and pain,” the dancer began. She continued, “It seemed after so long without it, my body just didn’t like it. I ended up trying @naturalcycles, the first & only FDA cleared birth control app and it’s been a great decision for me.”

The app apparently works by taking your basal body temperature every morning and entering the information into the app. And that is apparently what Sharna Burgess is doing in the photo. If you were a little confused, don’t worry. You weren’t the only one.

So no, as far as we all know, the DWTS Season 27 champion isn’t expecting – yet. We can’t rule that out forever, though. After all, the dancer and Brian Austin Green are pretty serious. Sharna turns 36 this year, so it’s reasonable to think she may be thinking about the possibility of children down the line.

Last year was a huge year for Dancing With The Stars babies, so it wouldn’t have been super surprising if Sharna Burgess actually announced a pregnancy. Pros Lindsay Arnold and Artem Chigvintsev both became first-time parents last year, and Witney Carson gave birth to a son at the beginning of January.

Peta Murgatroyd and Jenna Johnson also joke around from time to time that they have baby fever and are ready to get pregnant. So it isn’t completely unthinkable that Sharna would jump on the baby bandwagon too. Just not today.

‘Love Island USA’: Does Javonny Vega Plan To Tell-All On YouTube?!
Did Duggar Cousin Amy King Take ANOTHER Dig At Josh Recently?
‘Y&R Spoilers : Who Kidnapped Mariah Copeland And Where Is She?
Zero F***s? Erika Jayne Doesn’t Care About ‘RHOBH’ Cast
How Many Episodes Are In ‘When Calls The Heart’ Season 9?