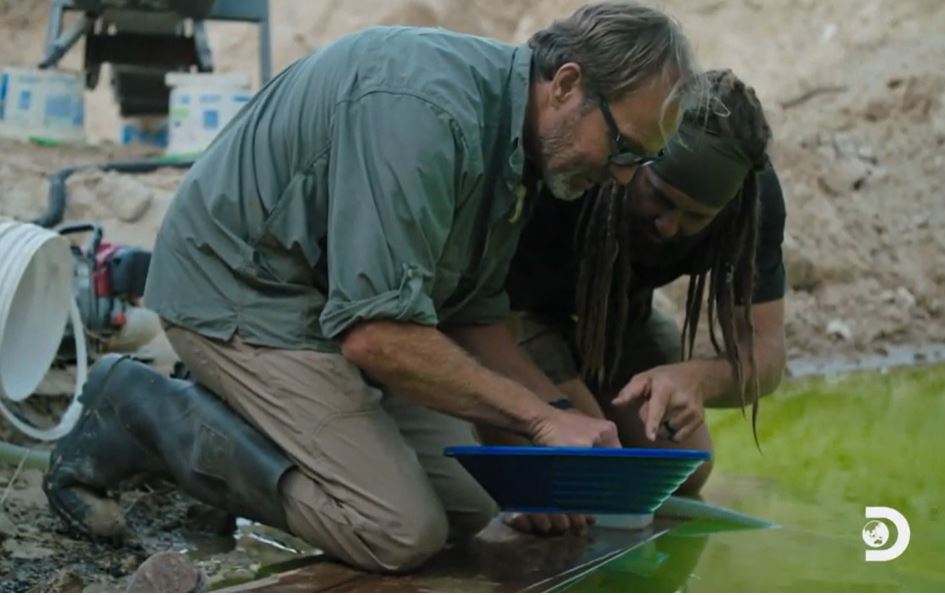 The distinct looking element is hard to find and vital to the aerospace manufacturing business and much more.

The two have discovered this while panning at the edge of the flooded cave entrance, and quickly race to find Duane Ollinger to share the news.

One pass with the XRF gun to determine the parts per million, and the results are insanely high.

What happens on Mystery At Blind Frog Ranch?

In TV Shows Ace exclusive clip, we see Duane and the production team from Discovery gather around Eric and Chad who have what they think is iridium.

Eric and Chad open our clip as they look at the sample by the water’s edge. And the excitement is too much for them, as they race to find Duane and analyze the sample.

The results are a game changer.

In their exchange, Eric and Chad note the flecks have a metallic bluish hue as the two pieces they are looking at has Eric’s wheels turning.
He tells Chad that somewhere near a big deposit of this valuable element may be found.  The two men know that iridium is a money metal, and that if there’s some to be found, Duane needs to knw about it stat.

Eric tells Chad that a large deposit of iridium, “could be worth millions tens of millions hundreds of millions…t’s that valuable.”

And he notes that from a geology aspect that the find is significant.

The two men find Duane and they set up the analysis. The XRF gun takes a pass. They know that to be even worth their while, the numbers have t be AT LEAST 20 parts per million.

The actual results are jaw-dropping

Eric shares that the specs they are examining are pure iridium as it jumped up to 800 000. The men are speechless.

Chad says: “I think Eric’s on to something here… we may have an iridium mind here.

Eric and Chad ask Duane: “Are you ready to become an iridium magnate?”

Duane doesn’t play and says: “That’d be a yes.”

Iridium is more common in asteroids than it is here on Earth. Cue the paranormal piqued interest! It’s a major piece of supporting evidence that an asteroid annihilated the dinosaurs.

Cha-ching for anyone lucky enough to find it.

It has a very high density and melting point. Iridium is noble metal and is brittle and is the second-densest known element known to man. It is very expensive and has several industrial applications, such as the aircraft industry. Its price has surged in recent times due to the demand from the tech industry

Iridium is the most corrosion-resistant material known and for that reason it is used in special alloys and forms an alloy with osmium, which is used for pen tips and compass bearings.

Check out their amazing find and tune in Friday on Discovery where the Blind Frog intrigue continues:

’90 Day Fiance: The Other Way’ Spoilers: Did Ellie & Victor Break Up?!
‘LPBW’ Audrey Roloff Shares Daughter Ember Is Fearless Here’s Why
Has Hannah Ferrier Really Moved On From ‘Below Deck Med’?
‘Sister Wives’: How Much Do Fans Know About Ysabel Brown’s Scoliosis & Her Surgery?
Chrishell Stause Gushes Over The Bouquets Jason Oppenheim Gifted Her