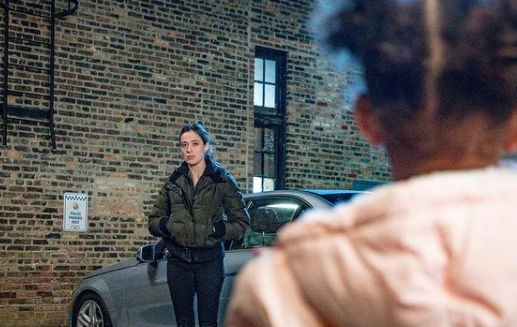 Chicago PD came in this week with another Kim Burgess centric episode. Last week was all about Jay and Hailey and this week is all about Adam and Kim. It is good that they are finally hashing out this on-again-off-again relationship. It needs to happen.

Adam and Kim have been a central couple throughout the eight seasons of Chicago PD, and they are constantly in flux. Both Kim and Adam have grown and changed since they were an official couple several seasons ago. But the drawback is that Kim still sees Adam as the same guy she ended her engagement to in Season 3. Adam has changed but through everything, he keeps coming back to Kim and she comes back to him. But this episode may spark the change that either ends the relationship altogether or makes it happen.

How it all starts

The episode opens with Adam and Kim coming to her apartment after dinner. After some banter and jokes, they start kissing, so of course, one thing leads to another. The next day they are on the way to work and they are acting like a couple. Adam says as much, “We already act like a couple is it so crazy to try again?”

Kim tells him that won’t work because she knows what she wants now. And she “knows” that Adam would not want the same thing. She wants the proposal, wedding, kids, the job, the whole mess. She asks Adam if he really wants to still date her and he says yes, but Kim doesn’t believe him. The radio goes off and they respond to a call. Adam is getting wise to the Chicago PD M.O. because he tells Kim to answer the call so she can avoid talking to him. Thank you for acknowledging what all fans were thinking Adam.

The call they make ends up being a wreck where one of the drivers had been severely beaten before the accident. The circumstances don’t make sense until a witness comes forward and says that he saw three kids run from a garage with weapons and jump in a getaway car. From there, things start to get complicated.

Why does it have to be kids Chicago PD?

Intelligence starts investigating the attempted car-jacking committed by teenagers. They discover the get-a-way car was stolen from a social worker. Her area of work is with kids that are aging out of the system, so Intelligence assumes that the offenders were under her care. But while at Social Services Kim and Adam see Makayla! Makayla runs up to Kim and hugs her. She tells Kim that she doesn’t know why they brought her there. But, more on that part later. A call about a possible carjacking in progress has Kim and Adam running out.

Kim, Adam, Jay and Hailey all arrive on scene of the assault in progress but all four of the offenders manage to getaway. They find the SUV the kids had been using as a getaway car and figure out that the four teens had been robbing their victims not stealing cars. Chicago PD really loves to keep fans guessing. After further checking, they figure out the kids are prostitutes and are robbing the men soliciting them. With this information, they are able to catch one of the kids, Miguel, but he refuses to cooperate. He tells Voight he has had enough help from people like them.

Intelligence releases Miguel hoping to follow him back to the other three teens, and they succeed. But the female teen, Lily, has been badly beaten and is in critical condition. Miguel explains that Lily was working the street again for some quick cash, but after getting in the car with a man she changed her mind. The man beat Lily for that and her friends came to her defense. But the three boys killed the man that beat Lily. Miguel is the only one they end up having in custody and he refuses to help find his friends.

The other Chicago story

Intelligence is unable to offer Miguel any help because he refuses to cooperate, but Kim is not satisfied with that option. So, she figures out where the other two boys are likely headed and gets Miguel to send the police looking in the opposite direction. This helps Miguel and it helps his friends.

But the underlying push is that Kim does not want any more children to suffer. After she saw Makayla, she asked Kevin what he needed when he first took in his sibling. Kevin told her he needed everything, but mostly just help. Hoping to help, Kim went to see Kathy, Makayla’s guardian, and offered to help her. But Kathy tells Kim that she can not be a good mother to Makayla and is giving up her rights. She chose to do this because she loves Makayla too much to hurt her. Kim asks Makayla’s social worker, Alana if she could take Makayla. Alana tells her this is not a decision to be made in the heat of the moment. Plus, there are other factors to consider, Kim is after all single, a busy police officer and white.

Well, Kim does just that. She thinks about it and talks to Kevin again. She confesses that a few months after her miscarriage she looked up the girl she saved when she lost the baby. But the girl’s mother told her she ran away and she had not heard from her. Kim tells Kevin she believes she can make a difference to Makayla despite the difficulty. Kevin tells Kim that though she will have some challenges as long as she loves Makayla the rest will take care of itself. Kevin is becoming the heart of Chicago PD.

Kim tells Adam that she is going to take Makayla and be her foster mother and that it may become a permanent thing. Having Kim take such a huge step throws Adam into a bit of a spin. He wants to know if she has really considered everything she is taking on. Adam tells her that earlier she questioned if their relationship now was real or just trauma bringing them together. She said trauma is not a good foundation for a relationship. But Kim uses his words instead. “Trauma can bring people closer, so why is that not real?” Adam tells her that no matter what happens he is going to be in her life. But he thinks she may be doing this so she does not see another kid lost.

The episode ends with Kim meeting Alana and Makayla. Kim asks Makayla if she would be ok coming to live with Kim. Makayla smiles and says yes, so Kim with Alana’s help loads her up in her car. The two start to head home with Makayla smiling at Kim in the rearview mirror. Kim starts driving but stops and looks forward with an expression that says, things have changed.

Did Kim’s decision to foster and possibly adopt Makayla scare Adam? Does he now realize that Kim was not kidding about what she wants? Is Adam really ready for the ready-made family? Is Kim ready for all the challenges she is taking on? How will her new position as a mom affect her work with intelligence? Could something change to take Makayla away from Kim? There are so many questions to be answered. And, fans really hope Chicago PD can pull this off.