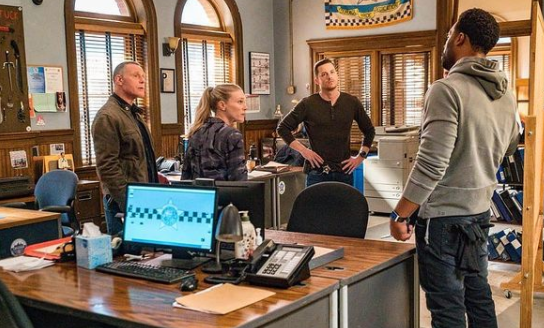 Chicago PD returned this week with the rest of the One Chicago line up and this episode definitely did not disappoint. Unlike what the promo indicated, this episode was not Halstead and Upton centric. This will they/won’t they couple had their moments but this episode really focused on Kim Burgess. Marina Squerciati absolutely rocked this episode. She reminded fans exactly why Kim Burgess is not to be messed with. So, before we dive into what happened, here is your spoiler warning! This week’s episode is called “Tender Age” and all the activity centers around a little girl that latches on to Kim.

The episode opens with Kim answering a phone call from her doctor and saying, “I have no plans to get pregnant again”. Apparently, Burgess decided after her miscarriage that she no longer wants to entertain the idea of having another baby. But Adam walks up at that moment and our beloved Burzek banter and play the perfect Chicago PD “old married couple.” Adam even says as much, pointing out that he and Kim always have breakfast together, hang out together and they don’t date other people. The conversation is cut short as Adam slams on the brakes to avoid a collision when a little girl, Makayla, walks out into the street.

Kim and Adam rush to Makayla and try to find out why she is outside alone and where her family is, but Makayla is in shock. She doesn’t speak, but Kim finds her name written on the collar of her shirt and they take her home. After arriving Kim sees blood splatter inside the house and calls for backup. Kim and Adam clear the house and find Makayla’s whole family murdered, and Makayla witnessed everything. Intelligence works to uncover what happened and Kim is assigned to sit with Makayla because she was “the first contact” and their priority is to make sure Makayla feels safe.

Kim continues to try and get Makayla to talk, but doesn’t have much luck so they take her to a foster home for the night. When they arrive at the house Kim opens up to Makayla and tells her about a time she was scared. Kim tells Makayla that even adults get scared and it is ok to be afraid. This seems to reach Makayla she starts to open up about what she saw. Kim leaves the room so she can call in the new information, but two people try to break into the house and take Makayla. Kim protects Makayla and demands that Makayla stay in her custody until they catch whoever is after her. Adam and Kim take Makayla to a safe house and stay with her after she falls asleep.

Details come out that Makayla was what the killer wanted all along. They discover that Makayla’s father was released from prison and intended to kidnap her. The plan was for her father and his girlfriend to kidnap Makayla and leave Chicago. Intelligence picks up the girlfriend, but she is smart and does not fall for the usual tactics during interrogation.

In an effort to identify the girlfriend Kim brings Makayla in for a line-up. Makayla hears the woman’s voice and immediately starts shaking in terror. Kim refuses to make Makayla do the line-up and instead says she will interrogate the girlfriend to find Makayla’s father. In epic Chicago PD fashion, Kim is able to trick the girlfriend into admitting where Makayla’s father is hiding. They find the father and Kim convinces him to surrender.

Now, the story that everyone was expecting to be the focus took a bit of a backseat, but Hailey and Jay had their moments. As they are working on the case Hailey gets a package from the Feds, which Jay is clearly concerned about. After the team briefing, he makes it a point to ask Hailey exactly what was in the package, and Hailey tells him it is a job offer. Jay probably expected that, but his main concern is where the job will be. Hailey tells him the job is in New York, pretty far from Chicago, and his response says all we need to know. He does not think the offer is as “cool” as he says.

Hailey and Jay work together as the awesome partners they are to help break the case, but the real moment comes at the very end of the episode. Jay tells her to “rip off the Band-Aid” and tell him about the job offer. The Feds don’t play around when they want to hire someone and they offered Hailey an amazing opportunity. But Hailey tells Jay that she believes that she is better when she works with him and the Intelligence Unit. Then she tells Jay he is the reason she doesn’t want to leave. Then she tearfully admits that she doesn’t think of him as just her partner anymore and hasn’t for a long time. And Halstead doesn’t waste any time before pulling her in for a kiss!

What’s coming up on Chicago PD

So, the question of will they/won’t they has been answered: They will! Now the question is: How are they going to work together and be a couple. We all know that Voight doesn’t care for relationships inside his unit. But Kim and Adam, and even Jay and Lindsay (a few seasons ago) made it work, somewhat anyway. Will the new couple be able to compartmentalize or will this new relationship cause some inter-office conflict?

This episode also brought Kim back to questioning if she wants to have children. She was not ready to be a mom last season when she got pregnant. Then after she lost the baby Kim didn’t want to try again. But Makayla changed that for her. Kim saw that she has instincts to be a mom, and Adam tells her that he always knew she would be a great mom. The question is, will Kim’s changing outlook bring her and Adam back together or will it finally end the couple for good? Chicago PD returns next week, so be ready.