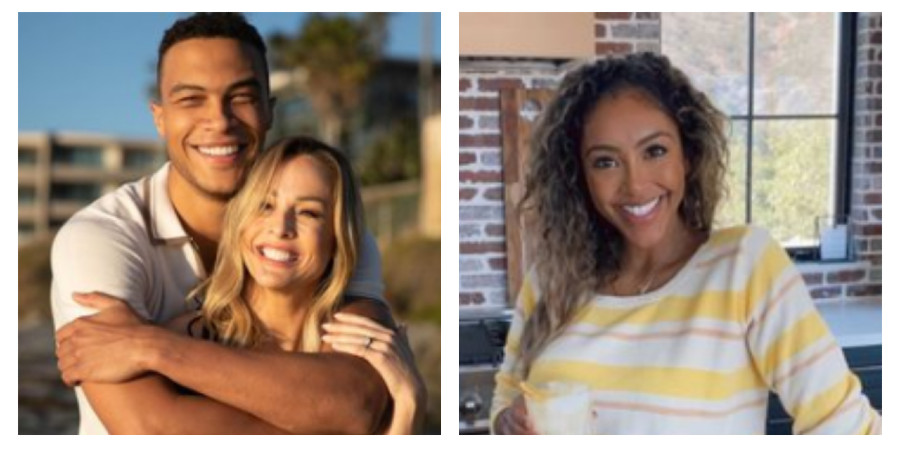 The Bachelorette star Tayshia Adams co-hosted Entertainment Tonight on Tuesday, February 2nd. That put her directly in the hot seat with Lauren Zima. And Tayshia had some tea to spill about how Clare Crawley is feeling after splitting from Dale Moss.

Clare Crawley was the original lead for Season 16 of The Bachelorette. However, just weeks into filming, she fell fast and hard for contestant Dale Moss. Her feelings were so strong that she didn’t want to continue the pretense of dating the other contestants. When Clare and Dale walked off into the sunset together, Tayshia Adams took over as The Bachelorette.

However, Dale Moss and Clare Crawley’s romance wouldn’t last long. In January, Dale released a statement confirming that they split, which was news to Clare. On ET, Tayshia said that she has spoken to Clare since the split, but not Dale.

When asked what advice she would give to the former couple, Tayshia suggested that Dale and Clare keep to themselves. She said, “You guys are both hurting right now, so just reach out to family and friends and ones you can confide in and stay out of the media.”

A little late for that! Dale Moss has been speaking out publicly on his Instagram, as well as to paparazzi. Clare has also talked about the break-up on her social media.

"Bachelorette" stars Clare Crawley and Dale Moss both spoke out over the weekend on how they are struggling with their breakup.https://t.co/3eDflFlpbx

Tayshia warned that things can get “messy” trying to get your side of the story out there.

In January, there were rumors of trouble between Dale Moss and Clare Crawley. Some outlets reported that the Bachelor Nation couple were “taking a break.” However, before the rumor even got cold, Dale Moss went public about the situation. But instead of a break, he said they were over.

A few days later, Clare Crawley made a statement that she first heard about the break-up with everyone else – when Dale released his statement. Since that time, they have both posted videos on their respective Instagrams about the struggle of moving on.

Many Bachelor Nation fans have slammed Dale for using the break-up to get media attention.

Since one Bachelorette couple bit the dust, fans worry about Tayshia Adams and her fiance Zac Clark. After the Season 16 finale, she spent some time with him in New York City. However, she said at the time that she would remain bicoastal for the time being.

During her chat with Lauren Zima, Tayshia gave an update on her relationship. She said it was nice to be with a “very mature man.” It is refreshing to her not to have arguments that can last “six or eight hours.”

She leaves fans with this piece of relationship advice: “When the going gets tough, keep going.”

Do you agree with Tayshia’s take on how Dale and Clare should have handled their split?

If you’re a member of Bachelor Nation, join our Bachelor/Bachelorette Facebook group to chat with other fans.

Watch Matt James’ journey to love Mondays on The Bachelor.