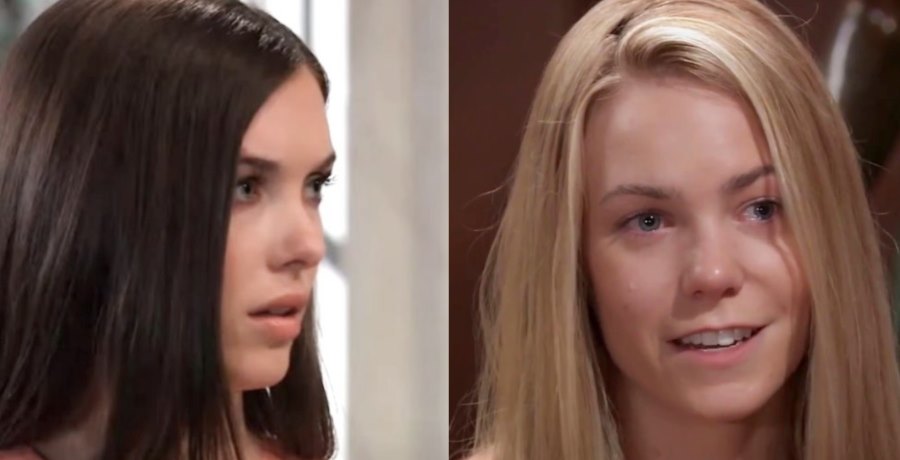 However, a necklace alone is not enough to confirm the overwhelming suspicions. So, until there’s a DNA test, the idea of Willow as Nina’s daughter still holds merit on the ABC soap.

Nelle Benson certainly has had a checkered past, as seen over the years on General Hospital. Most of her issues stem from her horrific childhood. First, she was abruptly taken from her mother. Clearly, her adopted family didn’t really want her either. Her adopted father treated her like a used parts shop and sold her kidney for a big payday. Plus, Nelle felt her adopted big sister Carly also abandoned her. After all, Carly knew the hell her life was like living with a monster of a dad like Frank Benson.

So began Nelle’s life of scheme after scheme to get want she felt was owed her remind General Hospital spoilers.  She used men like Kleenex and never missed an opportunity to manipulate a situation to benefit her goals. Nelle wasn’t shown any degree of love and kindness as a child. If she had no doubt, her life would have been much happier.

Nelle Benson Stole The Necklace From Willow As A Child?

Nina Reeves found a picture of Nelle as a child wearing the half heart necklace while going through her belongings yesterday on General Hospital. Nina is firm in her belief that whoever has the other half of her heart necklace is her daughter.

However, just because someone has a necklace doesn’t magically create matching DNA. Nelle is a known thief, schemer, and master manipulator. The fact the necklace is in her possession is easily explained. She must’ve stolen it from Nina’s real daughter. The photograph isn’t proof of anything more than that.

Just like Avery Jerome-Corinthos (Scarola twins) found the heart necklace, Nelle could’ve found it. Heck, she might’ve stolen it from another child. Perhaps Nelle’s jealous side started then? Further, that child whose necklace could also have been a young Willow Tait.

General Hospital writers love to lead their viewers down one path and pivot midway through. So although it may appear Nelle Benson is Nina’s daughter, Willow Tait certainly has not been ruled out.

Regardless if it’s Nelle Benson or Willow Tait, that’s Nina’s biological daughter, Nina’s Wiley Quartermaine’s grandmother. If Nelle is her daughter, then Wiley is her biological grandson. However,  Willow isn’t ruled out yet as Nina’s daughter. Then Nina will be Wiley’s adoptive grandmother since Willow’s set to adopt him per General Hospital spoilers.

Either way, Nina will get a chance to “mother” and nurture a child as a doting granny. Hopefully, the truth of the real identity of Nina’s daughter is sorted out soon. Certainly, fans are tiring of this very drawn out storyline on the ABC soap.