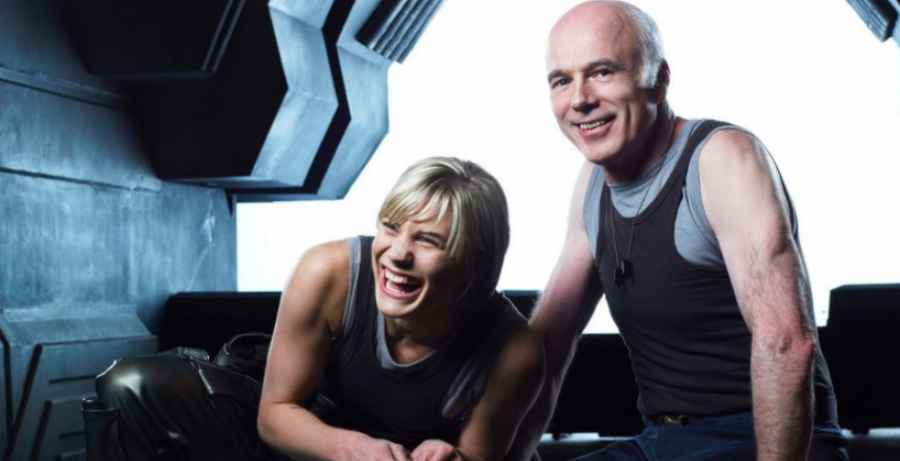 In September 2020, Cinemablend reported that Battlestar Galactica star Michael Hogan (Colonel Saul Tigh/the XO) had suffered a tragic accident. Almost a year ago, Hogan had a slip and fall which seriously injured him. It was in February 2020 that he fell at dinner, after appearing at a Battlestar Galactica convention in Vancouver.

Hogan went to bed, not thinking too much of his accident. However, it led to a brain bleed. The brain bleed led to paralysis on his left side, memory loss, cognitive impairment and an inability to swallow. It was necessary to insert a feeding tube and Hogan has been hospitalized since then. However, even if he was able to return home, the financial and spiritual toll on his family, along with extenuating medical costs, would be great.

A number of Hogan’s co-stars, including Katee Sackhoff (Starbuck), Tricia Helfer (Caprica 6) and more, rallied around him in the aftermath of his hospitalization. However, finally, there is hopeful news to share.

Hogan’s wife, Susan, has shared an update about her husband’s health and the positive direction it has been going for several weeks. Finally, after almost a year, things are beginning to look up for the veteran actor.

Katee Sackhoff shared an image of Starbuck and the XO on Instagram, with a note from his wife. Susan says he is now eating two meals a day. Michael does still have a feeding tube in his stomach, but he is now only fed one meal per day this way.

Susan said, “He is in a really good headspace! Joking constantly and charming the pants off the nurses.” However, Hogan does still get confused and sometimes doesn’t know where he is. However, Susan says he can easily be “jostled back into place.” Hogan’s wife said he has “such stamina, and determination,” it just blows her mind. Susan added that he gets so much of that strength from his co-stars and fans.

When the news first came out, Battlestar Galactica cast members shared posts with their fanbase to get them involved. This truly helped Hogan’s recovery story and got the ball rolling regarding helping out his family.

Donations have been pouring into the GoFundMe that a friend launched for Michael and his wife Susan. In fact, the fundraiser reached the goal of raising $350,000 for the actor in the fall. Should he return home, wheelchair ramps or even a lift might be necessary to help Michael access the multiple levels of his home. This would all not have been possible without the support of Hogan’s Battlestar Galactica fanbase and co-stars.

So far, it is unclear whether Hogan will be able to totally get back to normal. However, according to Susan, everyone sending him prayers and good wishes keeps him going day by day.