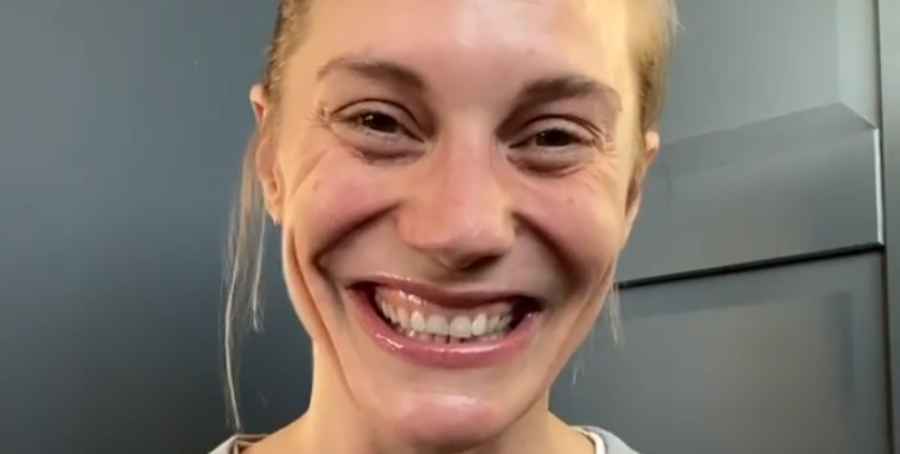 Back in 2003, the sci-fi series Battlestar Galactica debuted on Syfy. It introduced a new generation to the classic battle between the Cylons and human survivors. The critically acclaimed show ran for four seasons before the starship finally reached Earth. Now a new reboot of the popular series is coming to Peacock TV from producer Sam Esmail. However, Katee Sackhoff, who memorably played Starbuck on the series, is unlikely to feature.

Katee Sackhoff currently stars on another sci-fi show, The Mandalorian. Variety interviewed her, wanting to know if she would feature on the new Battlestar Galactica, even in a cameo role. Katee said she didn’t know and they haven’t contacted about the new series. She pointed out that she first got the role when she was 21 years of age. This means it is an amazing 19 years since Katee was first cast in the role of Starbuck. Her career has gone in many different directions since then and she doesn’t know if she could go back and play Starbuck again.

Sackhoff said at the time, there was “useful angst” about her character. She was a woman who was trying to find herself and her place in the world. This was fine for her as a woman in her early twenties. As a fan herself of the “mythology of Battlestar Galactica,” she is excited to see what Sam can create.

While she hasn’t been contacted, Katee did say if there is a role for her, she would “absolutely consider it with open arms.” She mentioned that Esmail is so talented, she is excited for fans that the BSG world will continue.

BSG will be set in the same universe

While Sackhoff didn’t say she wouldn’t consider a role as Starbuck in the new Battlestar Galactica, it doesn’t sound likely. Her character vanished once she arrived on Earth, so Starbuck is likely dead and gone. However, the new iteration will be set in the same universe and does open the door for familiar faces to appear. Despite this, as noted by Cinema Blend, the return of our favorite stars isn’t guaranteed.

Many firm fans of the BSG universe have watched the entire show a number of times. There is no doubt they will be interested to see a new version of their favorite sci-fi series. However, it sounds like it will be a while before the new show arrives on Peacock. The coronavirus pandemic has had a dramatic effect on the entertainment industry, delaying many shows.

For those who wouldn’t mind bingeing Battlestar Galactica again, it is currently available for free on Peacock. Alternatively, the full series is available for streaming on Amazon Prime Video. As for the BSG reboot, it isn’t time to get excited just yet.

Carly Waddell Of ‘BIP’ Isn’t Afraid To Ask For Help
‘Young and the Restless’ Exciting Plotline Spoilers For The Next 2 Weeks
Would You Sign Up For ’90 Day Fiance’ Alum Geoffrey Paschel’s OnlyFans Account?
’90 Day Fiance’ Friends Chris And Nikki Get Their Boogie On
‘Bold and the Beautiful’: Finn Slices Into Steffy and Liam With Dagger Eyes