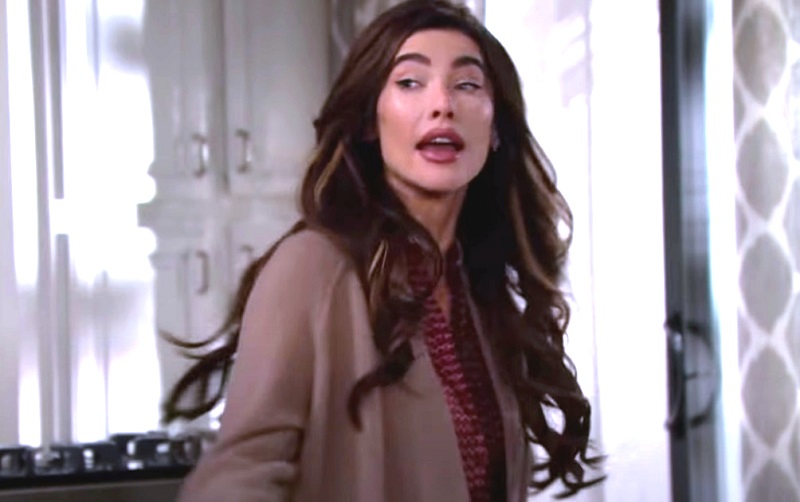 That’s Brooke, who is sure to let Steffy know she has some anger toward her as well. However, the pregnant and stressed out Steffy does have some people watching out for her and one of them is a handsome doctor.

Bold and the Beautiful Spoilers – Steffy Forrester Tells Her Dad

Bold and the Beautiful spoilers report that Steffy Forrester (Jacqueline MacInnes Wood) tells Ridge Forrester (Thorsten Kaye) about her pregnancy within the next few episodes.

After Brooke Logan (Katherine Kelly Lang) confronts her pregnant stepdaughter, Steffy needs to get busy. She hurries to tell her father, who will no doubt have the wrath of Brooke come down upon him over this.

Bold and the Beautiful spoilers indicate Steffy wants this news to come from her first. So, she seeks out her dad before he hears it from Brooke.

Steffy also shares with her dad how the father of her baby is one of two men. Once he hears Liam Spencer’s (Scott Clifton) name, he realizes what this means to the family, according to Bold and the Beautiful spoilers.

B&B spoilers suggest Ridge handles his daughter’s cheating with sympathy but Zoe’s caper with anger. Even though he catches Zende and Zoe before they did the deed, Ridge can’t let it go.

Now that Ridge knows, Zoe forgets all about the big wedding planning. Her new goal is to get Carter Walton (Lawrence Saint-Victor) to the altar before it’s too late. In the video below, she tells her intended groom that they can get married right now. It looks like she wants to say those vows before Ridge puts a stop to this marriage by telling Carter.

However, Bold and the Beautiful spoilers don’t have Ridge wasting much time. He won’t let Carter go on thinking he’s got a woman he can trust after what he overheard between Zoe and Zende.

B&B spoilers indicate that Finn (Tanner Novlan) takes on a new role of guardian for a stressed-out Steffy Forrester. The good doctor will make sure no one rattles the woman he plans his future with.

However, it doesn’t mean that some Bold and the Beautiful characters won’t attempt to ream her. Hope Logan (Annika Noelle) tells her mom, Brooke Logan (Katherine Kelly Lang), about the betrayal complete with the baby on the way.

B&B spoilers put Brooke at the hospital as Steffy awaits the results of her paternity test. The spoilers also give Brooke plenty to say to the pregnant Steffy. It seems Steffy’s doctor, Dr. Campbell, who warned Steffy to avoid stress, overhears Brooke confronting her pregnant patient.

Bold and the Beautiful spoilers hint at Brooke possibly causing Steffy to suffer some type of complication to her pregnancy as she whips into her at the hospital.

Despite Dr. Campbell telling Steffy that it was too early last week for the paternity test, it seems by the first week in February enough time has elapsed. Bold and the Beautiful spoilers have Steffy and Liam headed to the hospital to get that paternity test done.

So who is the father of Steffy Forrester’s baby? Spoilers still hint to someone switching the paternity test results. So far predictions call for a few contenders for that deed.

Bold and the Beautiful spoilers also put Steffy in a plane flying off to Paris soon. This is the B&B excuse for Jacqueline MacInnes Wood’s time off for maternity leave. But in the soap world, it could be stress that fuels that plane ride for Steffy across the ocean.

Spoilers suggest that Brooke comes on so strong that the stress causes some complications for Steffy’s pregnancy. It seems like Ridge devotes a lot of his attention to making sure Steffy and his unborn grandchild stay safe.

Bold and the Beautiful spoilers suggested a dark side of Finn is waiting to emerge. It seems he might need a little darker version of himself while dealing with all those in Steffy’s circle.

Bold and the Beautiful Spoilers – Still Hope for Hope Logan?

B&B spoilers suggest both Hope and Finn pray that Steffy will be able to find a new relationship with Liam. One that doesn’t include either of them running for each other at the drop of a hat. However,  Hope is not willing to forgive and forget just yet.

It seems the more Thomas Forrester ( Matthew Atkinson) advocates for Hope to give Liam another chance, the more she’s drawn to Thomas. It looks as if Liam’s worst nightmare is about to unfold with Hope and Thomas. Although, the new Thomas might still have some manipulating qualities left after his brain surgery.

These are just a few of the things Bold and the Beautiful fans have to look forward to during the first two weeks of February 2021.