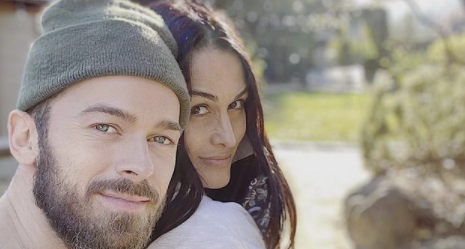 It’s no secret that Total Bellas star Nikki Bella and her fiance Artem Chigvintsev are in couples counseling. Nikki let fans know that as soon as Dancing With The Stars was over for the year, counseling was up next. Artem and his celebrity partner Kaitlyn Bristowe went on to win the season, so the couple had to wait until the very end to go. But how is it going for the two? Are they making any progress?

Well, they are working on things. Nikki recently sat down with Kaitlyn Bristowe on her podcast, Off The Vine. She admitted that when her fiance gets really stressed sometimes and doesn’t realize how harsh he can be. Artem and Nikki actually met on the set of Dancing With The Stars when they competed together in Season 25. As such, Kaitlyn and Nikki have both seen Artem during his ugly moments.

Nikki Bella Reveals Artem Can Really Have A Temper At Times

“Tell me, was Artem…Did you feel like he hated your guts during the season, or did you guys have a flirty thing?” Kaitlyn asked.

Nikki recalled that at one point Artem became so nitpicky with her that she just walked out of rehearsal. She got in her car and called her then-fiance John Cena to complain about how rough Artem could be. She even contemplated quitting.

“I remember during dress rehearsals sometimes I’d be like, ‘Is he mad at me?'” Nikki remembered. “It would just be his tone. It was hard, it was hard on me a lot.”

Kaitlyn agreed, although added she heard all the pros could be like that at times. It definitely at least seems to be a pattern with the Russian dancers. Rumors about how rough the Chmerkovskiy brothers can be have been around for years. And during Season 29, Gleb Savchenko famously apologized to his partner Chrishell Stause with a huge bouquet of flowers after an explosive argument.

They May Not Have Started On The Right Foot, But They Built A Happy Life Together

In an episode of The Bellas Podcast, Nikki Bella said that there were no romantic feelings at all between her and Artem Chigvintsev when they competed on DWTS together.

“You definitely get an emotional bond with them because it is so scary … I’ve never been that nervous before,” she said. “That’s the crazy thing being with [Artem] now is there were none of those feelings at all.”

Even though they had their rough patches, they did eventually grow as friends. After Nikki and WWE legend John Cena split up, she and Artem reconnected. They began dating in January 2019. Just a year later, they announced their engagement. Nikki announced her pregnancy in January 2020 and gave birth to their son, Matteo, in July.

Fans hope that Artem and Nikki will be able to work through their issues and be able to have the happily ever after they deserve. Keep following us on social media for updates! We’ll be the first to let you know when we know any more about this situation.