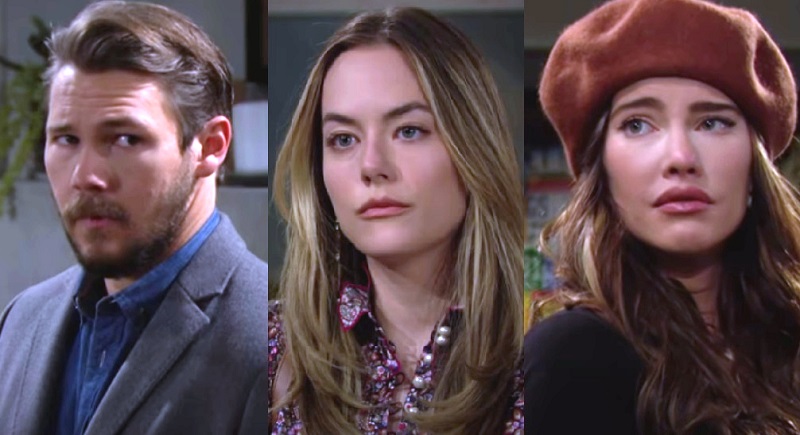 Bold and the Beautiful has a lot more than a paternity test going on these days as Steffy, Liam, and Hope deal with the fate of their future. A new baby is coming into this world and once the name of the father is known, they can plan their futures. However, B&B spoilers hint that Thomas and his attempts to get Liam and Hope back together might work at sealing his own fate with Hope.

Bold and the Beautiful – Steffy Forrester and Liam Spencer Shocked

Bold and the Beautiful spoilers suggest Liam Spencer (Scott Clinton) will still face the wrath of Thomas Forrester (Matthew Atkinson). Despite Thomas working to get Hope to reconsider taking Liam back, he is still furious at the waffling husband.

Thomas is a rising star in the eyes of his family. The change in him leaves people in awe. It looks like he is more invested in Hope Logan’s (Annika Noelle) happiness these days than he is his own.

B&B spoilers also hint that Thomas is making great strides in the coming weeks. He makes no secret of loving Hope but is this love pushing him to support her marriage to Liam? He also feels guilty as that kiss he planted on a mannequin started this mess.

Steffy Forrester (Jacqueline MacInnes Wood) already witnessed a surprise reaction from Finn (Tanner Novlan) as far as her pregnancy. So far, he not only still plans his future with Steffy but he vows to protect her from Liam’s manipulating ways.

While Hope had some time to process the changed behavior from Thomas, Liam and Steffy haven’t and the cheating duo are still stunned.

The fan jury from Bold and the Beautiful is still out when it comes to Thomas. Despite the kindness, he displays when it comes to his attempt at saving Liam and Hope’s marriage, fans aren’t willing to believe it just yet.

B&B spoilers put Liam in that same boat with the fans as they wait for the real Thomas Forrester to emerge. Liam tells Hope he is thankful that Thomas took this direction but he can’t forget what he’s done in the past. Fans wait to see if this is a new Thomas or the same manipulating Forrester son.

Steffy wants to believe in the change she sees in her brother. While it looks as if she does, Bold and the Beautiful spoilers suggest she has some reservations.

She too remembers the old Thomas too vividly not to question possible hidden motives. A lot depends upon Hope forgiving Liam and her taking him back. It will make things much easier for Steffy’s relationship with Finn if Liam stays with Hope.

So far Thomas looks sincere to his family members. Bold and the Beautiful spoilers suggest Steffy, along with her dad, Ridge Forrester (Thorsten Kaye) are proud of his behavior today.

Bold and the Beautiful – Hope Logan Lured By Change In Thomas Forrester?

Furthermore, B&B spoilers suggest that Thomas becomes Liam’s biggest hurdle when it comes to putting his marriage back together. Thomas continues to say all the right things to Hope about saving her marriage. However, she looks at the man Thomas is today and finds his new attitude attractive.

During the next few weeks, it’s not Thomas who Liam battles. Instead, he finds it is Hope he should worry about. All this support Thomas offers seem to change Hope. Bold and the Beautiful spoilers hint at Liam’s attempts to save his marriage finds the biggest roadblock is his wife. Thomas is the picture of the man Hope wanted for herself, the man she wishes Liam could be.

All she wants is for her husband to love only her. Bold and the Beautiful spoilers suggest she starts to realize that Liam may never be that man and possibly Thomas could be. Yes, Liam has a lot of work to do to put his family back together, it is not already too late.

Hope has a ready-made family with Thomas, Douglas, and Beth. That’s the dream she had with Liam but she can’t trust that he won’t run to Steffy again in the future. Now Thomas is there and he’s doing the right thing. respecting her marriage to Liam. However, Hope knows Thomas’s love for her hasn’t changed.

Will Hope be the one to break out of this long B&B love triangle? Probably not for good but it looks like she may give in to the temptation of Thomas down the line.