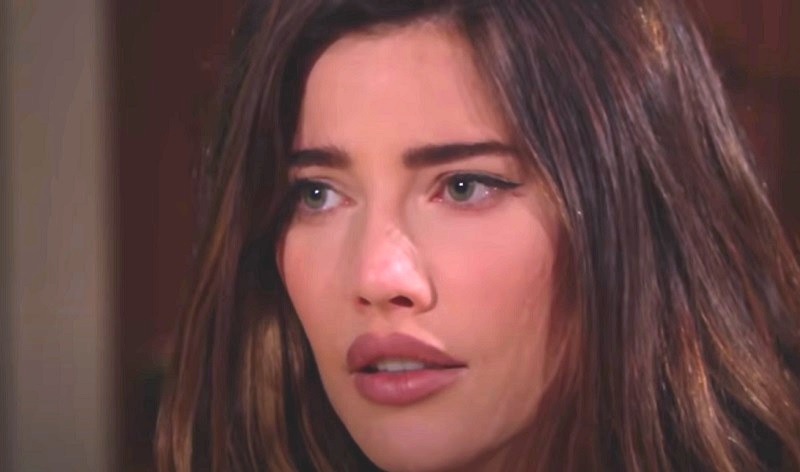 Bold and the Beautiful can’t do it all over again with another Steffy paternity test dragging on with it finally pointing to Liam, can they? It seems they can and probably will put Liam as the winner of this year’s who’s the daddy plot. So where’s the drama there?

Bold and the Beautiful – Steffy Forrester Pregnancy Ups the Drama?

It seems if Steffy Forrester (Jacqueline MacInnes Wood) finds out the baby belongs to Finn (Tanner Novlan) it’s a happy ending. But this is the Bold and the Beautiful and they need drama. The last time a baby was born to one of the dueling stepsisters, a kidnapping took place.

Hope Logan (Annika Noelle) and Liam Spencer (Scott Clifton) suffered greatly when they were lied to about their baby Beth not being alive when born. Then to find out she was alive and well and being raised by Steffy, well Bold and the Beautiful just can’t get more creative than that – or can they?

Liam Spencer Is Father To Only One Of Steffy’s Children?

Steffy’s last paternity test came about because the father of unborn Kelly was a toss-up. It was between Liam, or his father Bill Spencer (Don Diamont). Now Liam is in the running again. Only this time it’s between him and Finn.

On Friday’s show, Steffy was in a hurry to get that paternity test going. Maybe they’ll use what they already have on file, Kelly and Liam’s DNA. But this time just maybe it will show Liam is not the daddy but the sibling of Steffy’s firstborn. That would mean Bill is Kelly’s dad.

Finn’s Dark Side Promised On Bold and the Beautiful

Bold and the Beautiful spoilers suggest someone will tamper with this new paternity test. Since Finn has the run of the hospital as a doctor, it would make sense for him to do this. However, his personality so far doesn’t show Finn as a guy who would do this.

Still, if a promised dark side emerges as the Bold and the Beautiful spoilers suggest, then Finn just might tamper with the results. He could find out Liam is the father but he could also fix it so the report names Finn instead.

Finding out the paternity test that Steffy did to find Kelly’s father was hacked might be the best way to go. This would open the door to tons of Bold and the Beautiful drama.

Bold and the Beautiful does reach for the fantastic. Well, this prediction would be one of those over the edge story plots. However, it could work. Dizygotic twins are rare, like really rare, but it does happen. This is when, much like fraternal twins, more than one egg is released and two are fertilized. Twins are born but they’re not identical. But with dizygotic twins, the sperm is supplied by two different fathers.

However rare, it does happen that two different fathers fertilize those eggs. When the mom has relations with two different men in a short time period that possibility looms. So, why not loom for Bold and the Beautiful?

Something has to give with this Bold and the Beautiful plot. The baby has to be Liam’s child for drama purposes. However, they could find out someone tampered with the test results Steffy had done for Kelly’s paternity. Or they may tamper with these new test results. That leaves the canvas wide open for Bold and the Beautiful writers to pile the drama high. What do you think?