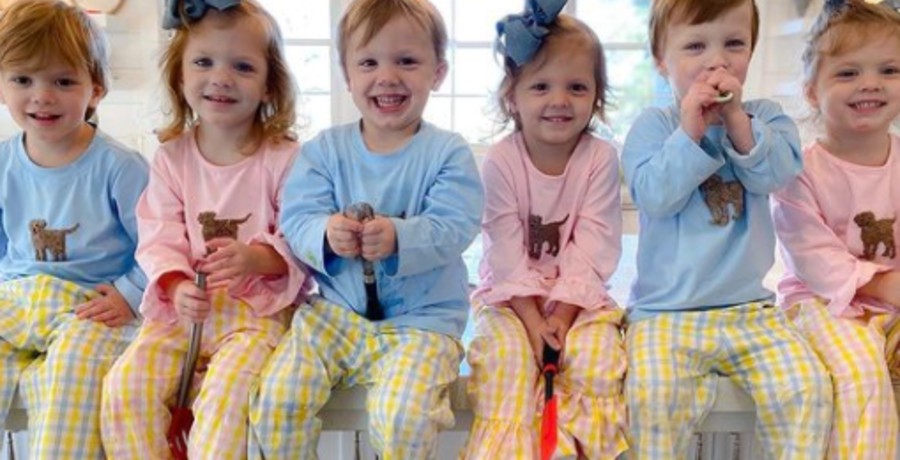 Sweet Home Sextuplets parents Courtney and Eric Waldrop have their hands full with six boys and three girls. Sometimes it is too much for their family pet, Otis. In an adorable post to their Instagram, Courtney shared a picture of Otis looking out the window watching them play. She captioned it, “we were playing outside and I turned around to see Otis chillin inside through the window. He’s not an inside dog..In fact he never comes inside at all.”

She said they left the door open and thought perhaps he wanted to escape the crazy. Courtney said she totally understood where Otis is coming from. The post got some backlash because fans were upset the dog lived outside. She said, “let me explain for everyone that’s questioning how we could let our dog live outside.”

The Sweet Home Sextuplets Mama Addressed Why Otis Lived Outside

Courtney Waldrop probably didn’t expect to have to defend herself when she posted the cute dog photo. As always, there were people who didn’t understand why Otis, a Great Pyrenees, was outside. While it was obvious to most fans, he was happier there, some still chose to write negative things about it which Courtney felt like she should address.

One said, “why have him if he’s not an inside dog? I see no point to owning him.” Many fans told people to chill and it wasn’t any of their business where their dog stays. A lot of fans went to bat saying that type of dog does much better outside. Another follower said you can’t post anything without people telling you how to raise your kids and your pets.

She Also Cooked With All The Toddlers

Also, Courtney posted a video where she’s cooking with the sextuplets. They all made a Big Bad Wolf Cake. People were freaking out about the kid running on the island. They were afraid he would fall, because he is running fast. She also takes them all to the grocery store commenting that they’ve never taken all six.

She captioned it, “how to not make cooking videos.” A large part of the video consisted of keeping the toddlers from putting their hands in the batter because they were curious. They posted the full video on their YouTube channel. A subscriber liked that they gave each toddler a task and let them help from beginning to end. They marked off things on the list and put things in the cart. The kitchen looked fun and chaotic, because of all the kids running around.

They said, “I love seeing parents give their children tasks to do at a young age. Seeing the sextuplets take part in the grocery shopping and baking was great. They’ll be so responsible when they’re older.” What do you think about the dog trying to get some quiet time in the house? What do you think about cooking with six toddlers? Comment with your thoughts below.