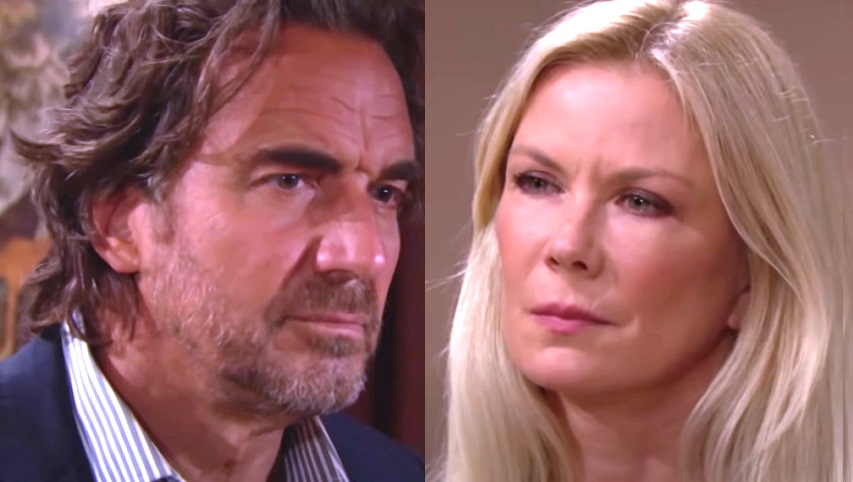 Bold and the Beautiful spoilers hint at a dark storm cloud forming over Brooke and Ridge as the next few weeks of this CBS soap play out. Once again this couple finds themselves on opposite teams as their adult children mess up their lives. But it’s not just Steffy, Hope, and Liam’s love triangle that captures their attention this time around. It seems another B&B family member is about to get some unsolicited advice from Ridge who finds himself policing affairs of the heart these days.

Bold and the Beautiful – Brooke Logan Goes After Steffy Forrester

Steffy Forrester (Jacqueline MacInnes Wood) will not escape the wrath of Brooke Logan (Katherine Kelly Lang). Bold and the Beautiful fans anticipate Brooke’s reaction to Steffy’s pregnancy. With one of the two possible fathers of Steffy’s unborn baby being Brooke’s son-in-law, she quickly gets involved.

Both Steffy and Liam Spencer (Scott Clifton) can expect to experience the wrath of Brooke in the coming Bold and the Beautiful episodes. Despite Hope Logan (Annika Noelle) attempting to keep this from her mother, she finds out and she’s furious at both Liam and Steffy. Hope confronted both her husband and Steffy. Now she retreats so, it looks like Brooke feels the need to step in for her daughter. B&B spoilers suggest some ugly words surface in this confrontation.

Bold and the Beautiful spoilers suggest that while Brooke is angry with Liam, she may become his biggest supporter when it comes to fixing his marriage. Once the initial shock wears off, Brooke sees Hope headed in the wrong direction and so, she suddenly becomes a supportive mother-in-law to Liam.

It looks like Brooke steps in and suggests Hope reconsider giving Liam another chance. This comes after Brooke realizes a split from Liam means a possible relationship with Thomas Forrester (Matthew Atkinson) for Hope. It’s not as if Thomas is in hot pursuit of Hope. What worries Brooke, it seems as if it’s the other way around.

Thomas’ threw away his old playbook after his surgery. The new one puts him as a caring friend to Hope. She finds this new Thomas attractive. If these two ever become a couple, as far as Thomas is concerned, it’s Hope who needs to make the first move.

Thomas made a promise to the love of his life that he’ll always respect her marriage to Liam. So this time around Bold and the Beautiful spoilers suggest Hope makes the first move on Thomas. This is what Brooke sees and suddenly jumps to team Liam.

Bold and the Beautiful – Ridge Forrester Finds His Hands Full

B&B spoilers suggest Ridge Forrester (Thorsten Kaye) gets busy as relationships fall apart including his own. It’s a given Brooke and Ridge find themselves at odds over the Steffy, Liam, and Hope saga. However, another couple is thrown into the mix.

Ridge overhears Zoe Buckingham (Kiara Barnes) and Zende Forrester (Delon de Metz) talking and realizes what Zoe is up to. Ridge and Carter Walton (Lawrence Saint-Victor) are close friends. Carter even asks Ridge to act as his best man. But now he sees his buddy’s world about to come crashing down as Zoe makes a play for Zende.

Bold and the Beautiful spoilers promise Ridge steps in with some harsh words for Zoe and Zende. But when it comes to Steffy and her dilemma, Ridge becomes a protective father.

He supports his daughter as she is pregnant and under a massive amount of stress. B&B spoilers put Ridge under pressure at home as his marriage gets tested once again over what the younger generation is up to with their love lives.

Just One Duggar Wishes Jim Bob Happy Birthday: Who Was It?
‘Manifest’ Uncancelled?! NBC & Netflix Reconsider Season 4
‘Naked and Afraid of Love’: New Dating Series Coming to discovery+ in August 2021
Brush Up On Brendan Morais Before ‘Bachelor In Paradise’
‘The Bold And The Beautiful’ Spoilers, July 19-23, 2021: Carter And Quinn Are All In