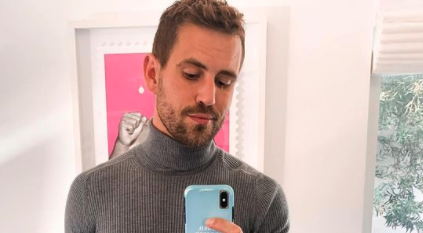 Nick Viall might be no longer single. Despite the breakup bug that has been spreading through Bachelor Nation, Nick might have found someone for himself. But, who is the new gal?

Nick and Natalie Joy are now possibly an item E! says. Apparently, the two were spotted out together in Los Angeles around the neighborhood in which Nick lives.

However, this likely doesn’t come as a giant surprise for Nick Viall fans. Apparently, the two have been engaging with each other on Instagram quite a bit which has given fans the vibe that they may be together.

According to E! on one picture earlier this year, Natalie wrote “this is what i’ll be doing while you watch football.”

Fans quickly recognized the pool in the photo as Nick’s and he also liked the photo. Seems pretty suspicious that they would be hanging out like this if they weren’t dating.

It’s also worth noting that there can oftentimes be a woman’s voice heard in the background of his Instagram stories. This would make sense if it were to be Natalie’s voice.

It was just last month that Nick Viall was caught commenting on January Jones’ Instagram photo.

However, he had a good reason. January was getting accused of being desperate on social media. She even posted an email from her reps about what the National Inquirer said.

Apparently, the magazine was  “preparing to publish a story which reports January Jones has worried friends with her series of attention-grabbing bikini pictures and social media posts,” the email she shares says. “Sources claim her content smacks of a ‘desperate cry for attention’ and note how her acting work appears to have dried up before [the] pandemic took hold.”

Of course, January did not stand for that.

She then shares a photo of herself in a bikini with the following caption: “S***. They’ve discovered my secret. Consider this my public apology to my ‘friends. “Had to do it,” January writes, ending with the hashtag “Desperate.”

Along with many other celebrities, Nick Viall jumped in to show his support for January Jones and what she is doing on social media. Of course, he had to try and be a bit funny.

Are you excited to see Nick Viall with a potential girlfriend? Let us know what you think in the comments. Come back to TV Shows Ace for more news on all of your favorite Bachelor Nation stars.

John David & Abbie Duggar Leave Arkansas Ahead Of Josh’s Trial
Tayshia Adams Did What? Zac Clark Spills The Tea
‘LPBW’ Tough Jackson Roloff Shows Dad What He Is Made Of
‘Ted Lasso’s’ Awkward Sassy Reunion Preview of Next Episode on Apple+TV
OMG!! Did Meri Brown Admit Her Husband Kody ABUSED Her?!