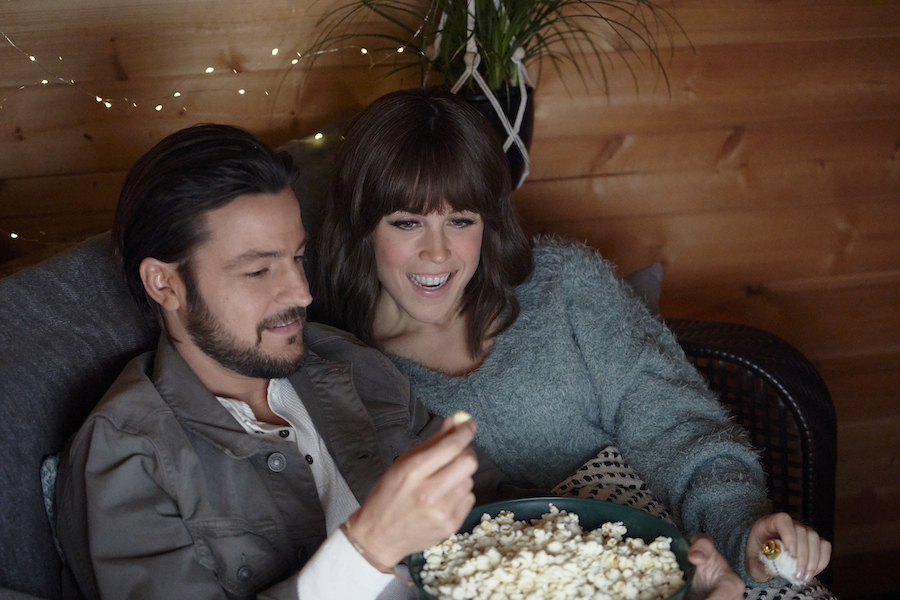 Hallmark’s final 2021 Love Ever After movie is the highly anticipated It Was Always You. This steamy Valentine’s themed romance stars Erin Krakow (When Calls The Heart) and Tyler Hynes (On The 12th Date Of Christmas).

Hallmark just released some photos from this new movie. Want to see the new pics and learn more about this upcoming movie?

Hallmark is ready to conclude the Love Ever After movies with It Was Always You. According to their press release, Elizabeth (Krakow) has her engagement all planned out. But, her fiancé is trapped on the other side of town. That is because there is a nasty storm and he is absolutely stuck.

Unfortunately, this means that she needs to take care of all of these important details on her own. However, her fiancé’s “free-spirited” brother did make it into town. David (Hynes) adds another wrench in Elizabeth’s plans. She still needs to plan her fabulous engagement party. Now, David is around to help her organize things, while making her question what she is really doing with her life.

This movie has an incredible treehouse, and the preview shots show slow dancing and some real attraction between the two leads. This movie will certainly please both the hearties and the hynies. Both stars are fan favorites and fans are just buzzing over this new movie. Fans cannot wait.

The Kenny-verse continues! The Nelson Wong fandom should be thrilled to know that he is in It Was Always You. According to an interview with My Devotional Thoughts, Nelson first became Kenny Kwan for the Donald Strachey Mysteries series. This was all director Ron Oliver’s doing.

That was when Kenny was a hotel clerk. But, thanks to Sir Ron, Kenny now has been a kitchen TV show director, wedding planner assistant, dance teacher, wedding DJ and most recently, in Timeless Christmas, a museum curator. In addition, Nelson Wong has been more than Kenny. He has also been Gerry, Chris, and Jeffrey.

Moreover, he is in the Picture Perfect Mysteries with the Penavegas. That means he has been in over 30 Hallmark movies. That is pretty crazy!

What do we know about his It Was Always You role? Nothing. But, Kenny has never disappointed. He brings a lot of extra fun to every role he plays.

When Can You Watch Hallmark’s It Was Always You?

It Was Always You premieres on the Hallmark  Channel on Saturday, February 27, at 9 p.m. Eastern, with a single encore airing on Sunday, February 28 at 7:00 p.m., Eastern. There are no March dates as of now. Be sure to check Hallmark’s listings.

Michelle Young’s ‘Bachelorette’ Cast Revealed!
Josh Duggar’s Arrest May Not Be The REAL Reason ‘Counting On’ Is Over
Hallmark’s ‘Sweet Revenge: A Hannah Swensen Mystery’ Reinvents ‘Murder She Baked’
OH NO!!! One Of Todd Chrisley’s Children Confirms Divorce
Amy Roloff & Chris Marek Accused Of Weight Gain Prior To Wedding