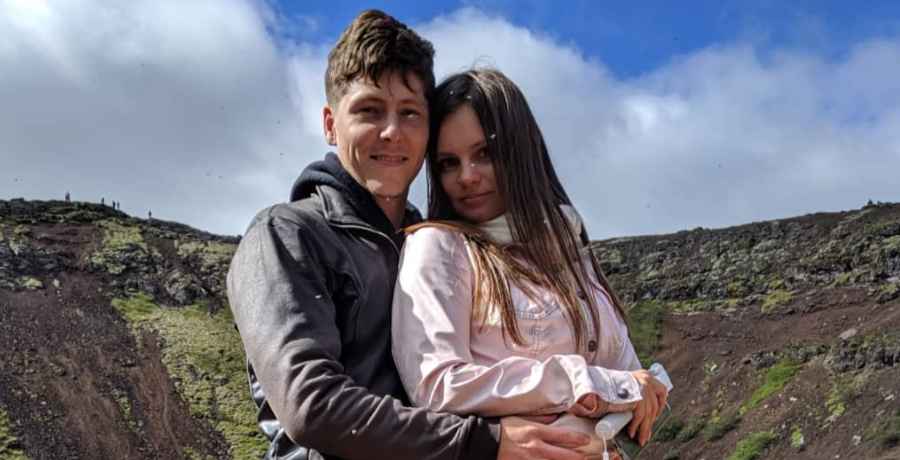 90 Day Fiance fans have always felt something was off about Brandon Gibbs’ parents and the drama over Julia Trubkina. First, we find out that “family friend” Aspen is actually Brandon’s aunt, Angi. Now fans are wondering Ron and Betty are faking the drama to help sell their German shepherd puppies.

90 Day Fiance’s Brandon and Julia and the farm

There has been nothing but drama since Julia Trubkina arrived to stay with Brandon and his parents at the farm. Poor Julia went through the whole birth control and no sex before marriage talk. However, his parents, Ron and Betty Gibbs have no problem getting Julia to work hard on the farm. There is nothing quite like free labor!

Since then, various revelations are appearing. Recently it was discovered that the family friend, Aspen, who showed Julia the ropes, isn’t a family friend. She is actually Brandon’s aunt Angi. We have no clue why this fact was hidden on Season 8 of 90 Day Fiance.

As fans have heard, Brandon works as a pest control technician and only works part-time on his parents’ farm, Hummingbird Acres. This means it is extra-handy to have Julia around to feed the animals.

Hummingbird Acres Farm and the dogs

A recent controversy did the social media rounds about the fact that the Gibbs raise German shepherds. Fans have accused them of running a “puppy mill,” and Julia even stood up for the mutts. She said they live better than many humans.  Part of the controversy related to the fact that Brandon’s parents have accused Julia of slacking on the farm.

Glancing at the website for the farm, it is revealed that Ron and Betty are breeding “European Imported” German Shepherd dogs. They are also raising “adorable, monkey-faced European Imported” Brussels Griffons.

While before, fans criticized Ron and Betty for running a “puppy mill,” now they are changing their tune.  Fans have come to the conclusion that Ron and Betty are yelling at Brandon and Julia for nothing. In other words, brewing up the drama just to attract interest to their dog business.

One Reddit user posted a thread, titled, “Frauding on Brandon and Julia’s storyline?” Here, it was claimed that Ron and Betty are exaggerating the drama for the camera. One 90 Day Fiance fan noted in a recent episode that Julia was complaining she has to spend the day alone at home. She is alone because Brandon works an 8-5 job as a pest control technician.

Frauding on Brandon and Julia’s storyline? from 90DayFiance

However, another fan recalls a major plot point in the previous episode, where Brandon’s parents claim the “farm chores don’t stop.” They made this accusation as they had issues with Brandon bringing Julia tea.

A TLC reality fan wonders quite rightfully why Brandon can’t move out, as he has a full-time job. Surely, he has been able to save enough to get by, despite flying to Europe a few times. It was at that point the fan began to suspect that Brandon and his family went on 90 Day Fiance for one reason only. This is to promote their alleged “puppy mill business.” By magnifying the drama and making the show more dramatic for the camera, they could maybe attract more sales.

Is Brandon short of money?

At the start of Season 8 of 90 Day Fiance, Brandon spoke about his pest control job and helps on and off on the farm. It was implied that Brandon and Julia have to stay there to save money. However, another fan on the thread pointed out that Brandon allegedly drives a 2-seat 350Z, has all the latest PlayStation games, a new Nintendo Switch and a fully built gaming PC. As noted by Screen Rant, this doesn’t sound like someone who is broke, although admittedly he might not have saved any money.

The biggest theory about Brandon is that no one in their right mind would appear on an “international hit TV show to embarrass themselves to this degree.” Admittedly, other 90 Day Fiance cast members are known for making fools of themselves.

Keep up with Brandon and Julia on 90 Day Fiance on TLC, Sundays at 8 pm ET.

Is Amber Portwood Back On Drugs? Why Fans Think She Might Be In Trouble
How Kim Kardashian Is Getting Her Divorce Revenge Body
‘Married at First Sight’: Amani & Woody Randall Make a Movie
Dale Moss Loses His Pants, Was Clare With Him?
Hailey Tomlinson’s Daughter Kinsley’s The Cutest Model