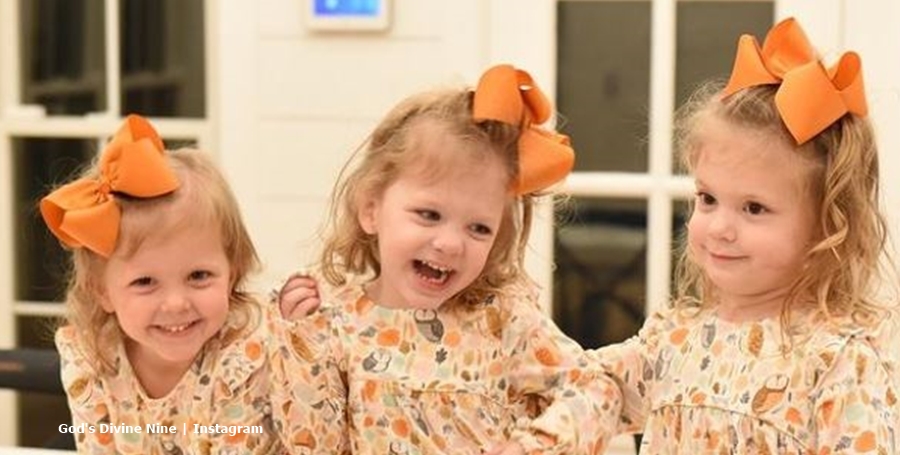 Rivers Waldrop, one of the sextuplets ended up with a nose bleed after playing with her brothers. Sweet Home Sextuplets fans know that Blu seems a bit of a wild child. In fact, mom Courtney sometimes says that there’s never a dull moment with Blu. Actually, more often than not, he bangs his own little head with his antics. Now, Rivers’ brother Tag accidentally banged his sister’s nose. It sounds like playing with boys involves some rambunctious rough stuff.

Rivers Waldrop plays with the boys, gets a nose bleed from Tag

Recently, fans saw Blu perched on top of the laundry basket which sat atop the couch. On his face, fans noticed several boo-boos. Since Blu could crawl, fans felt fears for the little boy. He always seems to stretch the limits of safety. And by the time he started walking, he seemed into everything dangerous. In the past, Sweet Home Sextuplets fans saw him climbing the banisters and hauling himself up on the kitchen counter. Clearly, he’s not concerned about pain. But it seems the other boys might also be a bit rough, as Tag hurt his sister Rivers.

Naturally, Tag didn’t hurt his sister Rivers Waldrop deliberately. But it seems things get a bit rough when they play together. Taking to her Instagram on January 20, Courtney revealed a photo of her husband Eric tending to Rivers. The poor little girl looked a bit forlorn as her dad held her close and wiped away her tears. Courtney captioned it with, “Baby girl got hit accidentally right in the nose by Tag🙈.” Then she added, “these poor girls may have to get used to some nose bleeds with SIX BROTHERS🥴.”

Of course, the family also includes the older brothers Saylor, Wales, and Bridge. Her hashtags read: “#rivers #brothersplayrough #nosebleeds #toughgirl.” Additionally, it seemed that only her dad could fix the boo-boo.

Fans felt a bit sorry for Rivers. One of them commented, “Oh no, poor Rivers. 🌸 I was raised with five brothers so booboo’s are frequent.”

Boys don’t try and hurt their sisters it seems. But naturally rambunctious, sometimes things end in tears. One fan shared their story: “I have 6 kids. One of my oldest boys was being so sweet and dancing with one of the little girls & accidentally knocked out one of her tooth’s. Still dealing with the orthodontics of it 6 years later! 😂🥰 (sic).”

Lots of fans liked that dad Eric took care of Rivers Waldrop. One Sweet Home Sextuplets fan said he’s like a “role model for young men.” Meanwhile, others loved how gentle he seemed with his daughter. One of them commented, “Such a good Daddy!!! 💗💗”

Certainly, it looks like many more boo-boos happen in years to come. Probably, Eric Waldrop becomes an expert at dealing with nose bleeds.