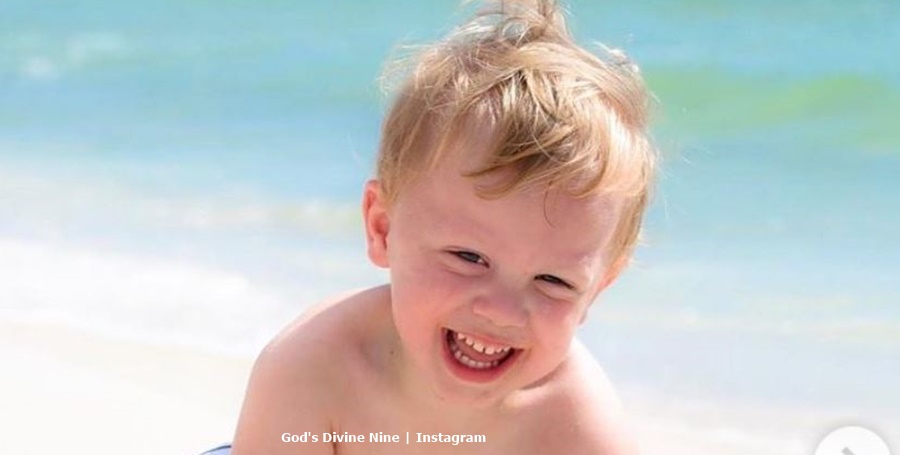 Sweet Home Sextuplets critics often say that the babies get out of hand. But none quite as much as toddler Blu. In fact, he seemingly courts danger a lot, but seldom gets disciplined for it. He always seems to have bumps and scratches. But his mom Courtney Waldrop seems unfazed. Now, the TLC star posted more about Blu and never a dull moment.

Many TLC fans saw that as a tiny tot, Blu always seems uncontrollable. Now, he’s a toddler, he seems even more stressful. In October, we reported that “fans think…he seems like the wild child of the Waldrop kids.” Last season, Blu’s parents yelled out at Blu for doing crazy things. But fans seldom heard any serious reprimand. He climbed on railings and even on top of the kitchen counter and more wild behavior.

Filmed about a year ago, People reminded readers that the kids went through “potty training” at the same time. Most of them failed with the first attempt. And, the Sweet Home Sextuplets mom noted Blu was the last to learn. Well naturally, fans think Blu had other things on his mind: like acting crazy and climbing into dangerous situations. It seems that he still thinks nothing of his actions that might hurt or end up in an ER visit.

Taking to Instagram on December 22, Courtney Waldrop shared another photo of Blu in potential danger. She captioned it with, “Nothing better than sitting on a laundry basket on top of the couch and watching cartoons!!🤣🤣🤣.” Fans noticed he sported a few scabs and “boo boos.”

One fan said, “From the looks of his nose I’d guess this wasn’t his first time! 😉 And another one noted sarcastically, “Extremely safe! Why do they get attracted to these dangerous situations? 😣.” Then, another follower commented, “Please don’t fall little dude!”

One Sweet Home Sextuplets fan noted, “Looks like [Blu] already has a boo boo on his nose. What’s another?! 🤣”

Mind you, a lot of fans simply adore the Waldrop family. And some of those with small boys talked about Blu’s mischief. One of them wrote, “At least none of his siblings are trapped under that basket! Mischief makers are the best kiddos! They keep us on our toes for sure. 😉😄”

Little kids seem exhausting. And nine kids seem like a nightmare for many people. But one fan would really love to be in Courtney’s position with her massive brood of boys. They wrote, “I love your life!!” Well, watching the chaos unfold on TV in Sweet Home Sextuplets, many people with just a of couple kids might think differently. But that comment came from a grandma who raised kids and obviously loves her own grandchildren. Possibly in her lifetime, she also experienced a wild child like Blu, always stretching the limits.