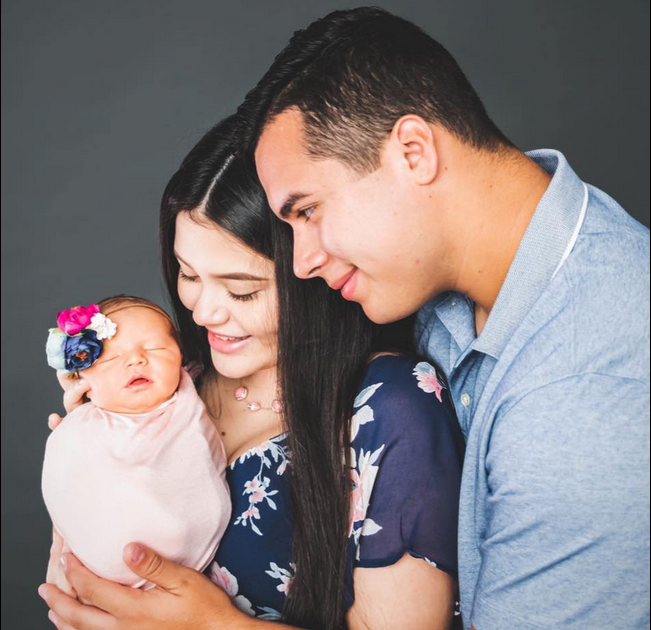 Ethan Ybarra posted on his Facebook account to confirm rumors that he had been kicked out.  He said, “Mellisa Hernandez is my aunt, and I am here to clarify that Myrka was always there and very respectful. Don’t believe her lies. She is the reason why we got kicked out. She wouldn’t leave us alone and called 24/7 to ask us all these questions like where my mum was and what she was doing”

The 17-year-old father continued, “I love her and mean no disrespect, you are in the wrong here, and if family doesn’t treat family like that stop being disrespectful and ugly to me and my family we don’t ever text you or talk about you so stop being so childish and leave my wife’s name out of your mouth and your social media because you know nothing on what we’re going through so if you mind your own business and stay in your lane I would really appreciate that” His parents admitted it was hard to see their young son with a child.

A post from @tlcunexpectedtea showed Mellisa Hernandez arguing with Myrka Cantu about what happened.” My sister has a big heart, but she has to do what is best for her kids. I, unlike my sister, don’t put up with ungrateful, disrespectful people who feel entitled”

In her defense, Myrka says the reason they got kicked out is that she did not answer Mellisa’s call.”If a family kicks out each other with a newborn because they didn’t answer the phone. They already said they were busy and they had just lost two family members, then I definitely do not want that family. Bye lmao,”  Myrka had been kicked out of her mother’s house after she refused to get an abortion. Her mother, Lillian, felt at the time she didn’t want Myrka’s baby to be her problem. Fans slammed her for her hypocrisy, considering she spends most of her time in Church.

Ethan and Myrka get kicked out and fans reaction

Another fan tried to make sense of this saying, “It’s possible that Myrka and Ethan got too comfortable. They probably weren’t showing gratitude to the people who were letting them stay there with their kid.”

The news was both shocking and confusing to viewers of Unexpected, “Truthfully this is sad. Ethan’s parents were so adamant about taking Myrka and the baby into their home, with open arms. Why did all of that change due to a boyfriend.” Everyone had thought Ethan’s family was the best place for the young couple to stay. “At least Myrkas mom was upfront about everything, Ethan’s parents, not so much. You can’t take in someone and magically kick them out. They either played the part for the show or took on the burden and then decided it wasn’t their problem.”

Where Did ‘1000-Lb Sisters’ Amy Halterman Buy Baby Gage’s Gear?
Abigail Heringer Gets Real About Her Feelings For Matt James
‘Sister Wives:’ Kody Says Marriage With Meri In A ‘Very Dark Place’ But He Can’t Leave
Chris Feels Like A ‘Failure’ Diet Buddy: Is Tammy Even Trying?
‘Sister Wives’: Meri Says Marriage to Kody Is Dead