Nanny Faye is feeling like a “sexy kitten” with her fresh look and fans couldn’t help but notice how much she reminded them of Lindsie Chrisley. Interestingly enough, there were several Chrisley Knows Best fans who felt the duo share a lot of features.

The Chrisley Knows Best official Instagram account shared a short video clip yesterday. The video clip featured Nanny Faye. Nanny Faye had a fresh look to share. She was feeling like a “sexy kitten.” Fans were here for it. But, some could not help but notice something. Does Nanny Faye look like an older version of Lindsie Chrisley? Many seem to think so.

“The resemblance between her and Lindsie is insane. Anyone else see it?” One follower penned in the comment before gushing about their love for Nanny Faye. Other fans flooded the comment with nearly a dozen likes. This suggested the individual was not alone in feeling this way. The comment also had a few replies.

“Right! I always was trying to pin point who she resembled the most. Now I know [and] see.” Another individual agreed.

A second individual chimed in agreeing they felt the same way. There were also other comments on the video pointing out how much she looked like Lindsie. Especially with this new wig. See a screenshot of the video and comments below. 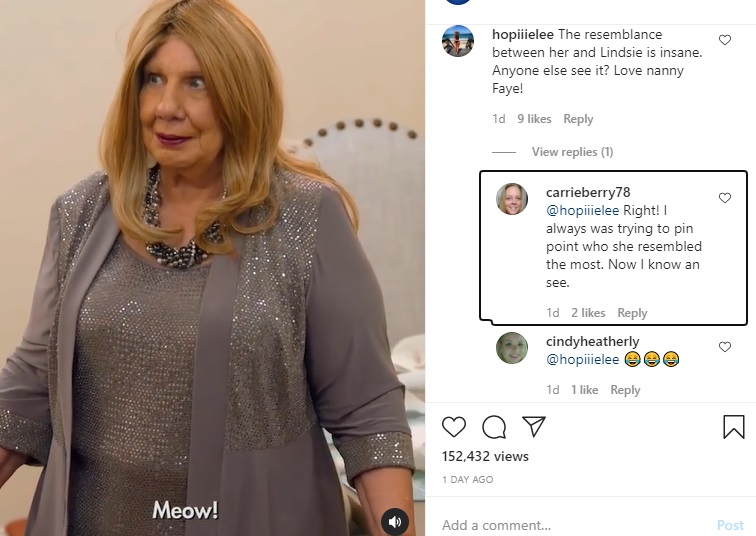 Fans assume the duo has no relationship

Unfortunately, Chrisley Knows Best fans have no choice but to assume Lindsie and Nanny Faye have no relationship. Lindsie Chrisley has made it clear she has no contact with her family. And, we reported she snubbed Nanny Faye Chrisley on her birthday.

Lindsie, however, maintains she isn’t interested in the toxic relationships that side of the family brings. Moreover, she mains they’ve made no effort to have a relationship with her. And, phones do work both ways.

Either way, it is a pretty sad situation. The real question is simple. Do you think Lindsie Chrisley looks like Nanny Faye? Share your thoughts on this comparison in the comments down below. And, stick with us for the latest Chrisley related news.