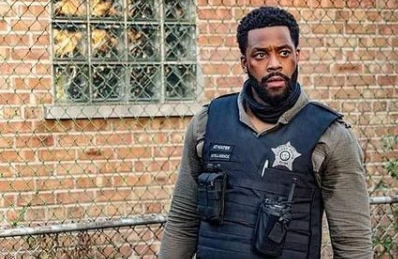 Wow, this was an amazing follow-up to last week’s premiere episode. I loved how Chicago PD handled the emotions, sensitive issues, and challenges that this episode presented and I am going to gush just a bit but Laroyce Hawkins was spectacular in this episode!

I am so disappointed that Kevin’s character has been so underutilized in this series. But I am very happy that he is getting his chance to shine now, and I really want to see even more of him this season. Now that the gushing is out of the way, how about I tell you all about this episode? And yes, for those that need the additional warning: SPOILERS to follow!

After Kevin was attacked last week, he installs a full security system at his house; cameras, sensors, monitoring, the works. He is taking no chances with his family’s safety, and I do not blame him. My one question though is why it took him this long to get a system in the first place. But the psychological war does not stop there.

As Kevin gets to the precinct, he realizes that his radio is not working and that he has been locked out of the police computer system. Voight asks Kevin if he can help Kevin deal with the people causing him problems, but Kevin refuses and wants to deal with them himself. Voight agrees to let Kevin deal with things his way and they head out to a scene for a case.

At the scene, they find a young man (Billy) high on drugs and holding the body of a dead female (Isla). Billy is holding the knife that was used to kill Isla. The case appears to be open and shut given the circumstances, but the catch is that Billy is the son of an Alderman that is a former cop.

When Voight arrives back at the office Deputy Superintendent Miller is there and tells Voight that they cannot afford Billy any special treatment because of his father. Miller also tells Voight that she expects him to question and charge Billy within 12 hours even though he is high. Voight doesn’t like the idea of questioning the kid while he is under the influence but does so because of Miller’s request.

Voight has the team continue digging into the case because something doesn’t feel right. During the investigation hints that patrol is not actively helping Intelligence begins to become evident. Billy’s Alderman father arrives with his lawyer and raises Cain about Intelligence questioning Billy without representation while under the influence. Billy declines representation; claiming his innocence and wants to help figure out what happened to his friend.

But all this does not stop Miller from being furious with Voight for not charging Billy already. Voight asks her why she is so eager to charge Billy. He even calls her out saying, “What if that kid in there were black, would you be ordering me to charge ASAP?” Voight doesn’t hold back on turning her agenda around on her. He closes his argument by telling her, “I don’t care who his father is. You do.” Whew, go Voight! The case unfolds piece by piece and the entire picture starts coming together, and Billy starts looking more innocent.

Throughout the episode, Atwater is a bit on edge. The alarm system in his house is triggered so he goes home to look into it. Kevin gets home and talks with his brother Jordan, but as he goes through his house we watch as Kevin seems to start unraveling. Jordan looks scared that his brother has lost his mind until Kevin finds a surveillance wire hidden in a light switch. Suddenly Kevin doesn’t look so crazy.

As Kevin goes back to work the team finds evidence of another possible murder suspect, so Burgess, Ruzek, and Kevin go to look for him. As they watch the house the suspect might be, they see him and give chase. Ruzek calls for patrol officers to back them up and contain the area, but no units respond. As the chase continues the suspect shoots Ruzek. Thankfully his vest stops the bullet. But Atwater quickly realizes that his partner could have died because patrol is not backing up Intelligence because of him.

Atwater immediately tries to find out who didn’t back them up on the chase and confronts McKenzie, an associate of Doyle. Atwater and McKenzie shove each other, but then McKenzie surprises him by telling him that he been given orders. McKenzie went on to tell him that no one on patrol wanted to be going after him. They didn’t have a choice. This really makes Atwater think about things. After the confrontation Intelligence does find and arrest the real murderer.

Atwater is not satisfied to continue being a target so he confronts Nolan. Nolan tells him that he will make sure to keep coming after Kevin in every way he can until he has Kevin’s badge. With no one to turn to Kevin finally talks to Voight. Kevin tells Voight he knows that he only has two options: quit or let Voight fix things. But when Voight explains that to fix things Kevin will have to have a formal complaint placed on his record, permanently disqualifying him from any future promotion.

Kevin does not accept this option as a solution. He tells Voight that after everything he has gone through he doesn’t know if he wants to be a cop anymore. Kevin says that hates not trusting his fellow officers and he hates that he is mad all the time at everyone.

But what he hates most is every cop that has ever gotten the job done by doing it the wrong way, which means he hates himself. Voight tells him that if he hates it then do it better because, “You are a good cop, and you are a good man. As soon as you aren’t one anymore, they are winning.” Voight promises to stand behind Kevin whatever he chooses.

And it turns out there was a third option. Kevin goes to Nolan’s house, proving he can do exactly what Nolan had done earlier to him. (Seriously why do none of these police officers have security systems?!) Kevin gives Nolan the ultimate ultimatum: leave him and his unit alone or Atwater will make it his mission to destroy Nolan’s life by exposing the harassment he had received and crucifying him in the court of public opinion as a racist police officer. Nolan realizes that he has no choice but to leave Atwater alone. But I know we have not seen the last of this guy.

This episode hit so many great notes that giving y’all a recap just does not do the episode justice. I wish I could recap every detail of the episode. But that would be an even more ridiculously long post. So instead, I will just say a few things to wrap up. Jason Beghe and Laroyce Hawkins have just been blowing my mind with their scenes. The two of them have played off each other and put me through the emotional wringer. And you know what, I love it!

Kevin’s story is not over. I am excited to see him regain his faith in his fellow officers and his faith in his profession. I would actually love to see a redemption arc for McKenzie. This episode proved that no character is completely one dimensional on this show. The writers should be very proud of that. I am sad that One Chicago is on hiatus, but that gives us plenty of time to speculate about what will happen next.