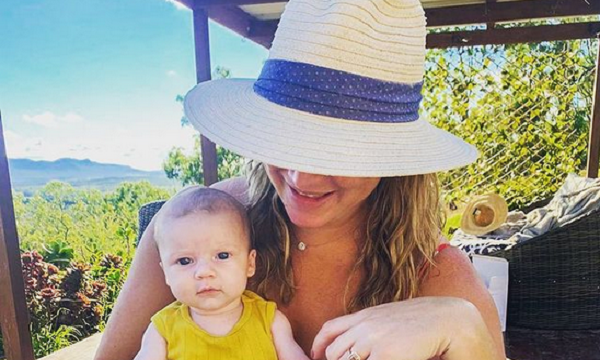 Below Deck Med alum Hannah Ferrier and her fiance Josh Roberts have finally become “Insta official.” Fans wondered why Hannah never posted a photo of Josh on Instagram. She has been respectful about not sharing photos of him without his consent. On their 2-year anniversary, she opted to share a photo of herself while pregnant with their first child.

But the fans were not satisfied. They wanted to know why Hannah couldn’t share any photos of Josh. Some of them even doubted the former chief stewardess. They wondered if she actually had anyone special in her life. Others begged her for a photo, and so she finally showed him off.

On Wednesday, January 13, Hannah Ferrier shared a photo of herself with her fiance, Josh Roberts. Now that the couple welcomed their daughter in October and are engaged, she thought now was a good time to share a photo of him. In the photo, Hannah wore a white sweater with a matching knit hat. She also had on a burgundy plaid scarf.

Meanwhile, Josh wore a gray sweatshirt underneath an olive green jacket. He gives her a silly expression as she smiles.

She then added in the comments section: “PS This is how he looks at me about 89% of the time.” She included crying and laughing emojis. Josh looks unsure about becoming “Insta official” in the photo. Hannah’s post received over 65,000 likes and over 1,000 comments.

Fans were finally excited to see a photo of her fiance. Most of the Below Deck fans flocked to the post to share their thoughts.

Josh is not on Instagram. He doesn’t seem to like social media, according to Hannah Ferrier herself. She took to Twitter on how Josh takes her memes literally. He doesn’t understand internet humor. But the couple still lives a happy and quiet life with their first child.

She also protects Josh from any fan backlash. To make sure that doesn’t happy, Hannah kept Josh off her Instagram page. Instead of focusing on social media, the couple is building their life together in Australia. Hannah is clearly enjoying the next stage in her life.

What do you think of Hannah and Josh’s photo? Sound off below.