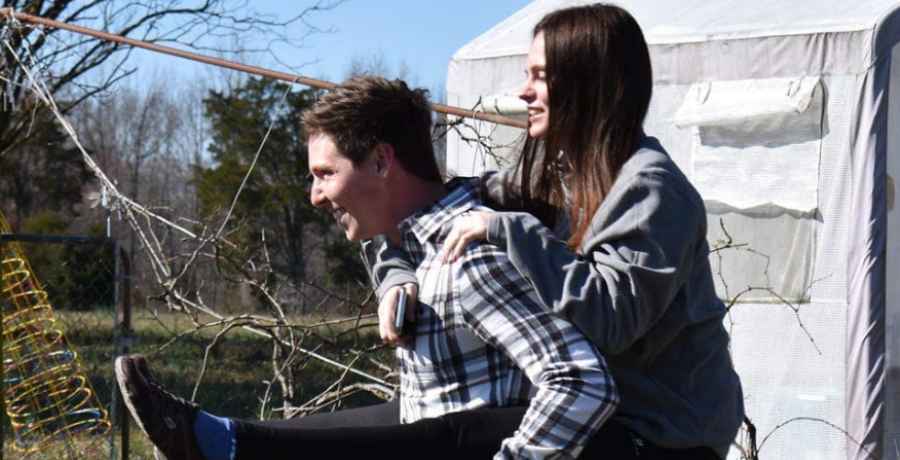 Last Sunday’s episode of Season 8 of 90 Day Fiance didn’t feature Brandon Gibbs and Julia Trubkina. Despite not appearing, Brandon decided to keep his fans “entertained.” However, the TLC reality star, who recently slammed fans for their comments, went way too far.

Brandon’s proposal to Russian beauty Julia took two trips and a visa application. The TLC reality star paid for all this by putting himself into $10k debt. However, the act of bringing Julia to America came at an even higher cost. This price includes the pair staying with Brandon’s overbearing parents. Julia is not impressed with Betty and Ron’s no-sex, separate-bedroom rules. However, Julia decided to give it a month to adjust to farm life with Brandon. If it doesn’t work out, she will return home to Russia. In the meantime, Julia was quickly assigned to animal-feeding duties on the farm.

This is all well and good until fans heard a family friend criticizing Julia. The friend, Aspen said that Julia was “slacking.” This led them to believe that the Gibbs family is taking advantage of the former go-go dancer by forcing her to work on the farm.

Brandon and his joke about Russian slave Julia

It is likely that 90 Day Fiance fans’ comments led Brandon to do what he did. When Brandon realized that he and Julia weren’t going to feature in Sunday’s episode, he decided to keep his fans entertained. However, it turns out the farmer’s boy has a weird sense of humor.

Brandon’s video post to his private account on Instagram was slammed by fans as “tone-deaf.” In fact, the clip reveals him joking about enslaving and whipping his Russian girlfriend, Julia.  In the video, Gibbs can be seen to be riding a lawnmower while sipping a beer. Meanwhile, an unknown person, likely Julia, is pulling him along, while handling the phone camera.

The TLC reality star can be heard saying, “Hello, this is Brandon Gibbs you might know me from the hit TV show, ‘I Love a Mama’s Boy,’” As he is speaking, he scolds Julia for not keeping the camera steady. Brandon says, “People have been saying that Julia’s slave labor, are you kidding me? Nothing could be farther from the truth.”

However, as he says this, the lawnmower hits a hole in the ground, which makes Brandon spill his beer. He then pretends to have a fit of rage, saying he’ll “send her a** back to where she came from. I swear to G*d.”  He then cracks a whip at Julia while yelling, “Come here.”

Most 90 Day Fiance fans were shocked by the post. One wrote, “You lost me once you brought out the whip. This is extremely tone-deaf and I hope you’ll address it.” Another fan commented, “tone-deaf, insensitive and not funny.” That fan said how very disappointed they were, especially in light of the events of this week.”

A Redditor shared the video on that platform and also received a barrage of angry comments from 90 Day Fiance fans. One wrote, “And just like that, I f***ing hate him.” Another wrote, “Wow he might just have made the record for fastest cancellation of a cast member on the show. Yikes.”

Another fan went on to write that Brandon’s video has “so many uncomfortable layers.” Yet another fan noted how ignorant Brandon is, especially as he lives on a farm in Virginia. They wrote that there is no excuse for making jokes about slavery. It should be noted that in the past, the slave trade was Virginia’s biggest industry. In fact, it accounted for the sale of as many as two million people.

If you are up to it, take a peek at the video below.

TW: abuse / slavery ********** Brandon posted this “joke” on his Instagram… from 90dayfianceuncensored

Brandon did post an apology after reading the comments, saying it was all in fun. Gibbs asked his fans not to be offended. Gibbs does admit that his humor comes out a little dark but says he is nothing but a loving person. In fact, he says he wanted everyone to be entertained.

Readers, is this apology too little, too late? Drop your opinions in the comment section below.